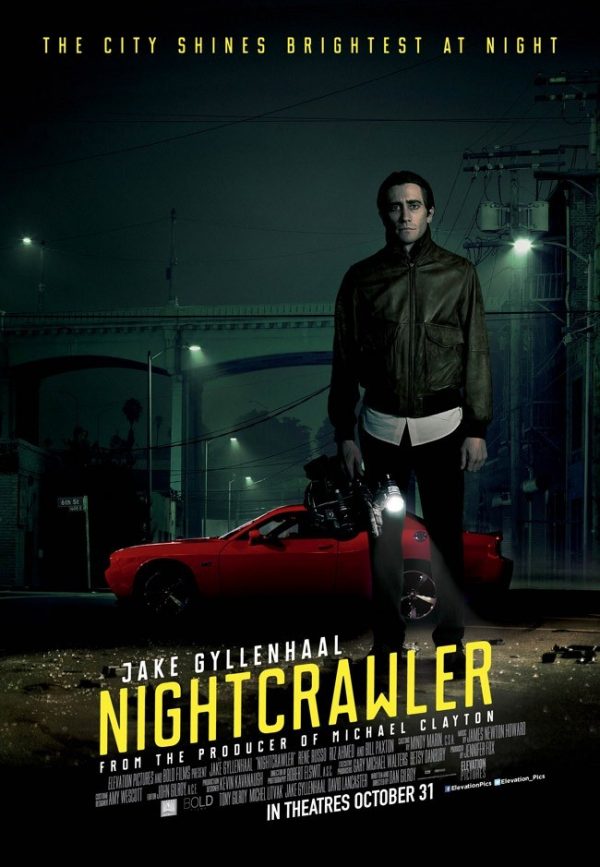 A young man stumbles upon the underground world of L.A. freelance crime journalism. 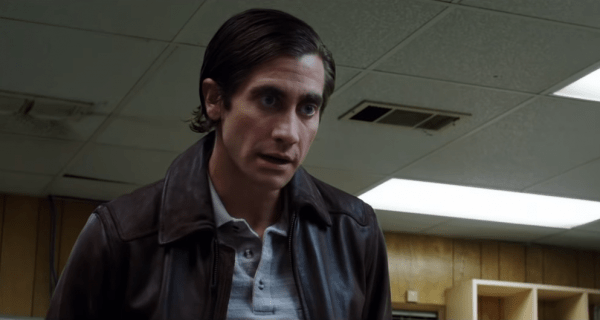 Motivation for success is a perfectly fine trait to have, but what happens when all moral consciousness is lost while climbing the ladder? In Nightcrawler Jake Gyllenhaal plays Louis Bloom, an introverted and idiosyncratic enigma of a man that is 100% apathetic to society. So when he decides to take up the art of nightcrawling – filming the aftermath of crimes and selling them to news anchors – he makes a natural fit, going out of his way and doing some pretty deplorable things to make a living. Essentially, the art of nightcrawling can be summed up as skillfully profiting off of selling murder.

Before getting into how equally inhumane the media is, it must be said that Jake Gyllenhaal’s performance is nothing short of legendary. I’m convinced that this movie is being released on Halloween simply because he is downright terrifying, and comes across as a complete nutcase without a single care for anyone or anything but himself. Even more creepy are his facial expressions and mannerisms; whether it’s gigantic eyes, a sinister smile, or coldly delivering dialogue, this character will unsettle you to the core. Like Christian Bale in American Psycho, it is abundantly clear that Louis Bloom is a sociopath with a skewed vision of the world.

We are talking about a man that never has any emotional distraught over filming horrific things, such as a toddler being found stabbed, violent car accidents, homicides, and more. Nightcrawler as a whole is one of the most twisted films in all of cinema, and none of it feels manipulated or over-staged. Reason being is that the overall theme of the movie, whether we want to admit it or not, is scathingly accurate.

Louis sells the contents of his nighttime adventures to a local Los Angeles news team ran by Nina (Rene Russo), who we quickly find out is all about molding crime stories into sensationalistic fear mongering. Obviously, it’s because controversy creates cash. Together, Louis and Nina develop a sick admiration for each other, but what stands out more is that she is just as immoral as Louis. One of the most frightening scenes in the film comes when she ferociously argues with the rest of her team about legally airing the grisly aftermath of murdered bodies that have not even been identified yet, on-air for ratings.

That isn’t even the most thrilling and captivating sequence of Nightcrawler either, as I would need another hand to count the number of scenes that truly just chill you to the bone. This movie is so disturbing and devoid of morality that watching it is like going swimming in a pool full of mud. A great representation of this feeling comes from Louis’ business partner – who is mostly hired to give on-road directions and assist with capturing live footage. During the early stages of the film he is mostly curious about Louis and his way of looking at the world, but grows increasingly terrified of him as the movie continues, just like the audience. Riz Ahmed essentially gives a fantastic supporting performance that is seemingly always able to reflect what is on the viewer’s mind.

As a whole, Nightcrawler just might be the best acted film of 2014. Jake Gyllenhaal is most definitely the centerpiece deserving of Academy Award recognition, but all of the supporting players put in some phenomenal work too. It’s fairly evident that writer/director Dan Gilroy is aware of this too, as there are some exchanges between characters that go on for quite a few minutes, but are immensely intense due to how powerful the performances are behind the sickening story. Also, while James Newton Howard has definitely conjured up a very mysterious and haunting soundtrack, some of the more creepy scenes are even more effective with complete silence in the background.

There really isn’t anything to fault Nightcrawler for. Sure, it goes way over the top, sometimes drifting into black comedy territory, but that just helps strengthen the message of the movie. The ending is a little weird, as it doesn’t feel like anything in the movie really gets resolved, but the movie is built up, written, and executed in a way to where it isn’t bothersome. It’s just something that feels right.

With that said, Nightcrawler is not a movie for everyone, and will require audience members to have a stick sense of humor to cope with what is mostly, a flat-out horrifying film that is highly socially relevant. The acting is amazing, the writing is brilliance that blends the line between satire and ugly truth, and overall, the movie is just gleefully twisted fun.