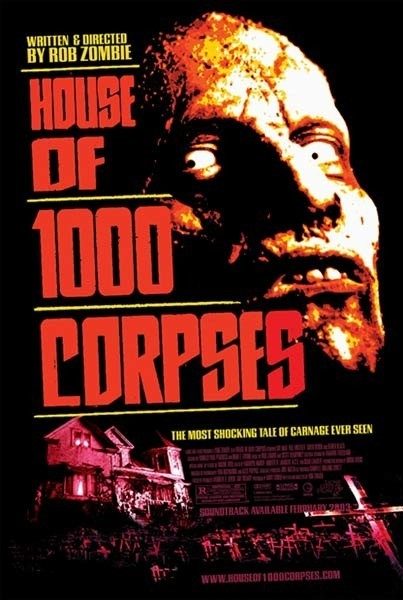 Four young thrill-seekers exploring the backwoods of Texas become the victims of a family of sadistic killers. With his latest movie 31 recently dividing audiences with its back-to-basics approach, crowdfunded production and the director’s seeming refusal to put out an uncensored cut, Fabulous Films have gone back to the beginning of controversial director/metal icon Rob Zombie’s filmmaking career and reissued his debut feature House of 1000 Corpses on DVD (why is there still no Blu-ray release for the UK?) and what an interesting exercise it is revisiting this offbeat little gem.

Interesting because there are many parallels between this movie and 31 – troubled production and director’s cuts notwithstanding, there are also plenty of narrative similarities – but whereas 31 felt rushed, compromised and Zombie reacting to the backlash that 2012’s The Lords of Salem received due to its deviance from the director’s established trademarks, House of 1000 Corpses still feels like the work of a filmmaker with vision, enthusiasm and a desire to replicate his favourite horror/exploitation movies of the 1970s. With hindsight and the knowledge of the torture porn genre that followed it, and how quickly it went stale once the Saw movies became a yearly event, House… still feels fresh and somewhat stylish, mainly thanks to Rob Zombie’s use of music video-style clips – he had been directing his own music videos for years before this – and his excellent soundtrack choices but also because of the actors that he chose to portray his characters, especially B-movie legend Sid Haig (Jackie Brown/Spider Baby) as the iconic Captain Spaulding, genre stalwarts Bill Moseley (The Texas Chainsaw Massacre 2) and Karen Black (Burnt Offerings). This was also the first major acting role for Sheri Moon (Sheri Moon Zombie by the time the movie was originally released) who, for better or for worse, went on to appear in all of her husband’s movies and despite the criticism she attracts for her acting ‘skills’ she does fit right in as the maniacal Baby, who spends most of the film screeching and giggling. 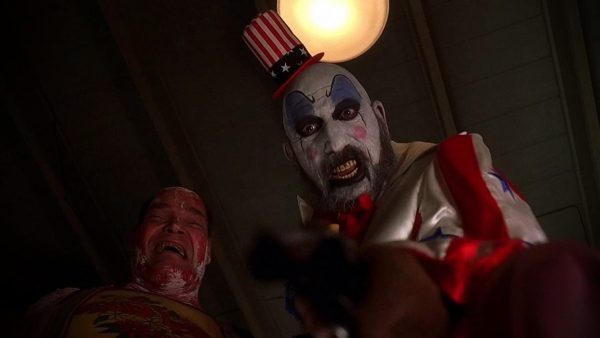 The main plot of the movie is the same as a hundred other backwoods horror movies – teens wander off the main highway and encounter a family of killers – and Zombie makes no bones about the influence of Tobe Hooper’s The Texas Chain Saw Massacre and its wacky sequel, no doubt spurred on by the appearance of Bill Moseley but also because of the tone that the filmmaker manages to conjure up, one of unnerving terror, the feeling of dread and the notion that anything could happen at any time. The opening scenes feature Captain Spaulding fending off armed robbers from his roadside fried chicken stop and although we initially side with the clown as he shoots one of the offenders we know that he is a no-good character, and although the writing gives you a hint but nothing concrete it is Sid Haig’s genial performance with an undertone of something not being quite right that carries the story forward; even when the four kids come knocking on his door to ask for directions to the spot where local serial killer legend Dr. Satan was hung Haig plays it friendly but slightly off, never being openly hostile or aggressive but just a little bit weird. It is only when the kids run into Baby that things step up and once they reach her house all bets are off as we are introduced to Mother Firefly (Black), psychopathic albino Otis (Moseley) and several other family members that let us know straight away that things won’t end well for our victims. Once the intimidation and brutality starts the movie becomes a relentless rollercoaster of disorientating sounds, colours and splatter that you know Rob Zombie was absolutely loving as he orchestrated the mayhem from behind his camera.

The thing is, House of 1000 Corpses hits a wall about 65 minutes in when the madness reaches a crescendo and you’re ready for a big finale that never really comes. The characters that are left leave the titular house, go outside and this is where the tone changes from one of multi-coloured insanity and a carnival of gore into a dark chase movie, the pace slowing and the direction losing focus as the film wanders off into near-supernatural territory. We do get to see Dr. Satan and some of his nefarious deeds but there is little tension and no pay-off to it, ending the film on something of an anticlimax considering how well Rob Zombie established his universe and warped aesthetics in such a short time. 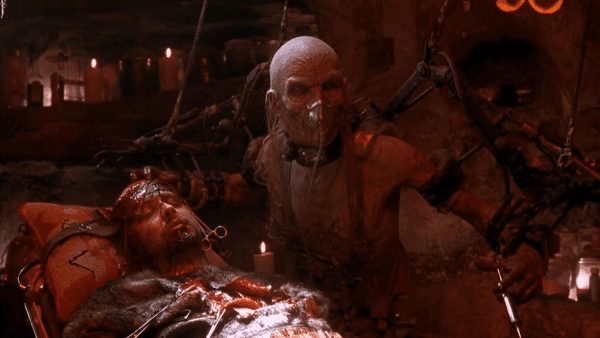 House of 1000 Corpses is far from being a perfect film; in fact, it is a meandering and incoherent mess once you get past the brilliant setup but despite its shortcomings as a film with a flowing story it is an iconic horror movie and one that set the tone for what happened within the genre over the following decade. Rob Zombie himself has spoken about the way the film was treated during production and insists there is at least an hour’s worth of missing footage shot that makes all of the Dr. Satan stuff make more sense so maybe one day that footage will emerge and we can finally see the full demented scenario that Zombie had in his head. Until then this truncated and somewhat compromised version of the movie will have to do, which makes it sound like a worse experience than it is to watch it but because for the first hour the film is so determined to immerse you in this world with these bizarre characters and does it so well, when it does start to unravel towards the end it just feels frustrating.

Including an audio commentary from Rob Zombie, trailers, a couple of behind-the-scenes featurettes and the original (and better) one-sheet artwork on the cover, House of 1000 Corpses is definitely worth a revisit if it has been a while or if the uninspired 31 made you hanker for when Rob Zombie had passion for his craft. If, however, you have yet to experience the film or you are only familiar with the Firefly family from The Devil’s Rejects – the 2005 sequel that saw the bulk of the cast reprising their roles in a different take on the characters and giving Rob Zombie a brief flirtation with mainstream success in a movie that was more of a homage to ‘70s grindhouse movies than it was pure horror – then be prepared for a fun and disturbing but ultimately disjointed ride with a movie that pretty much set up the horror genre for the few years following its release, albeit in a very quotable and more memorable way than many of the other, more celebrated, horror movies of the time.