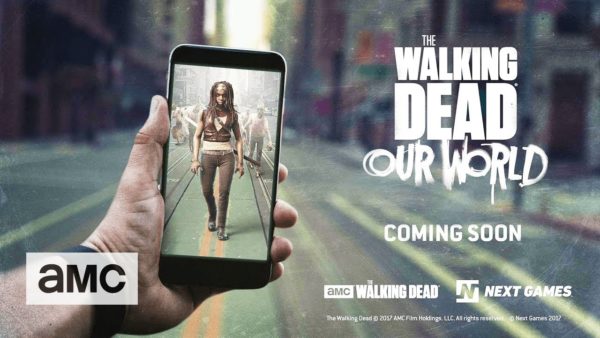 With Pokemon Go you could walk down an aisle in the supermarket and come across a Pokemon (normally a Pidgey or Caterpie in my case) that you could catch but in The Walking Dead: Our World you can encounter fan favourite characters like Rick, Michonne and everybody’s favourite lovable redneck Daryl, however, there is also an extremely good chance that you will come face to face with one of the decaying, shuffling Walkers.  It goes without saying that these will need killing if you are to survive (and get your shopping done).

The Walking Dead: Our World, first-of-a-kind location based augmented reality mobile game will hit Apple App Store and Google Play soon. Fight walkers on the streets, in the park, on your sofa, wherever and whenever you feel like it. You don’t need to face the apocalypse alone; Rick, Daryl, Michonne and all your favorite characters from AMC’s The Walking Dead will fight by your side.

The Walking Dead: Our World will be coming soon to Android and iOS devices.