Creative Assembly have released a new video revealing the campaign world for their upcoming title Total War: Warhammer II which is due to be released on the 28th September.  This video removes all traces of the fog of war and shows all the starting locations of all the playable races with the exception of the Skaven clans.  If you are one of those people who like to explore the world at your own pace and discover things on your own then this video is one to miss. 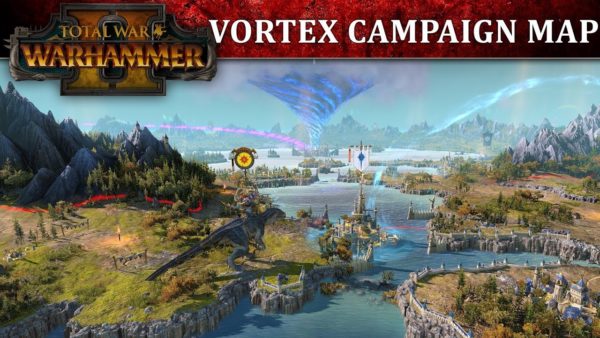 The Vortex campaign map is a huge campaign area that stretches from the shores of Albion to the High Elf owned Citadel of Dusk at the southernmost tip of Lustria.  In the video we are treated to glimpses of some of the locations we will venture through such as The Land of Assassins owned by Bretonnian Knights, the Dwarf controlled Spine of Sotek and the Vampire Coast which is occupied by the Vampire Lord Luthor Harken and his undead hordes.

Today we’ll take you on a tour of the entire Vortex Campaign Map for Total War: WARHAMMER 2. This video will lift the fog of war and show you the starting locations of all the playable races and sub factions. The locations of Skaven clans will still be hidden, but for the explorers out there who want to discover the new world for themselves, be mindful that minor spoilers are ahead!

Total War: Warhammer II will be available on the 28th September and is available to pre-order now