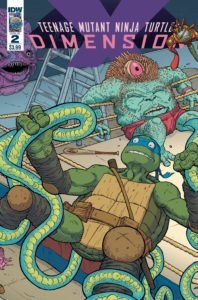 In a world of giant flying fish monsters, only one creature is strong enough to survive—Anemon! Will the Turtles be able to defeat him and bring him to testify at the Trial of Krang?

I had a concern that each issue of the Dimension X series would follow the same pattern. The TMNT find a witness, only to confront Hakk-R, who despite immediately becoming a favourite of mine, would fail in some contrived fashion that would undermine his status to set up a final battle.

Issue #1 had a more obvious structure to it (which didn’t stop me loving it), but without giving away too much, issue #2 manages to swerve away from what I expected, as it gives us another interesting witness.

Michael Dialynas did some great work back in issues #53, #54, and #55, when he dealt with Mikey and the Mutanimals. It’s good to see him again, even if it’s only for one issue. His turtles aren’t soft like Campbell’s, nor are they quite as angled as Santolouco’s; he strikes a nice balance. Anemon reminds me of an old Ghostbusters action figure (I think a mail man), with his face on his torso. He’s not that striking otherwise, but the design seems more made to fit the story need than to leave a lasting impression. That’s not to put it down, but there are a lot of TMNT characters now and it’s tricky to stand out!

The story this issue didn’t blow my mind if I’m honest. I found it a bit tricky to follow exactly what was going on. I’m not sure if that’s due to the writing or the panel layout but I found myself having to go back and read pages to figure out how things were moving on.

Nice shout out to things that have happened before with Mikey. That guy can make a pizza anywhere!

I do like the ideas being presented but I’m not as taken as I was last week. #2 looks great, but it doesn’t quite hit the mark.