“Karai’s Path,” part 2 of 4. As Karai becomes embroiled in the Tokyo underworld, an ancient sword may show her the true path forward… if she can overcome the obstacles guarding it! 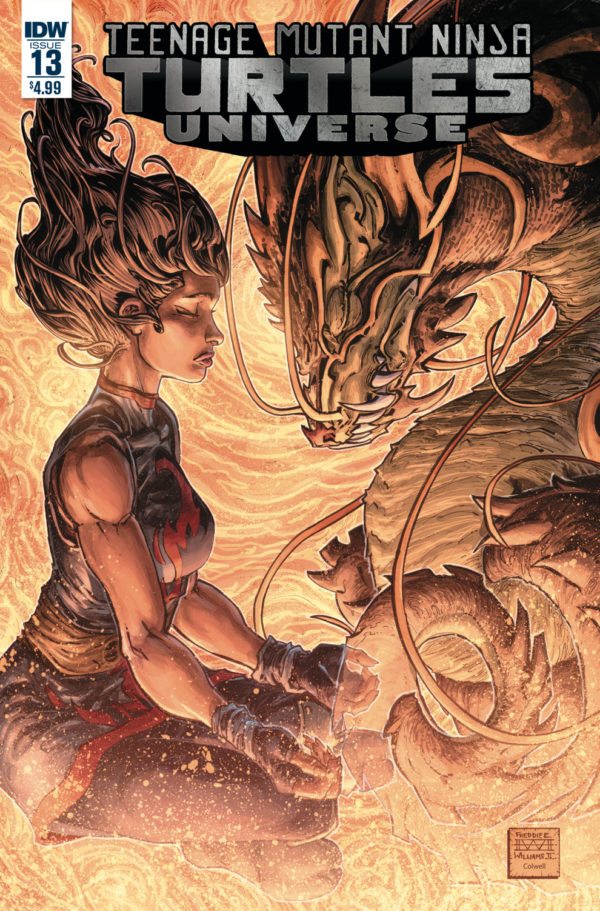 The theme of this arc appears to be ‘adapt’. We see all three characters, Karai, Koya, and Bludgeon, attempting this with varying degrees of success.

But what was my first thought upon finishing #13 of TMNT Universe? Koya really needs to sort herself out! Shes a very dramatic character, always high pitched and on edge. She’s frustrating, exactly as real people are. And there’s the important thing; I don’t think of her as just a mutant or a huge deadly bird. She’s a true character, with strengths and weaknesses.

Bludgeon is really chill about the whole thing. He’s been through loss too, maybe even more so, but he’s getting on with his life and trying to come to terms with it all. They make for a good pair, and it might sound odd but I want to see them both get a better place.

I can’t say the same for Karai. She’d definitely interesting, and I am intrigued to see what she becomes now that The Foot isn’t her concern. But I don’t want her to do well! She’s caused my boys serious problems.

So much of this issue is dialogue and character based that I’m not going to dig it into for fear of spoilers. Suffice to say the story is beginning to tie into other aspects of the TMNT universe (He did it! He used the name!).

The art…well it’s just as I expect, which means it’s fantastic. Campbell has such a way with designs. Sounds weird, but everyone looks so human. Wide noses, bigger foreheads, normal characteristics of people. People don’t look perfect, and nor should they. I love seeing such human looking humans.

This arc has the mutants supporting the human characters. It makes a nice change. TMNT Universe #13 doesn’t blow me away with huge revelations but it’s far from perfunctory.