Westeros is eerily peaceful. King Aerys I sits on the Iron Throne. A ravaging plague has abated. Yet beneath the surface, tensions linger sixteen years after a failed rebellion. In these restless times, noble hedge knight Ser Duncan the Tall—Dunk, to his friends—and his precocious boy squire, Egg, travel the Seven Kingdoms performing chivalrous deeds, though Egg’s bloodline must be concealed at all costs.

After heading north for Winterfell, Dunk and Egg are lured off the kingsroad by a wedding feast—and an unusually lucrative tournament. The champion jouster will claim a rare trophy indeed: a dragon’s egg. Dunk, always better in a melee, would be satisfied with a hot meal, a cup of wine, and a purse full of coins. But a treasonous plot is more likely to hatch before another dragon ever stretches its wings. Someone’s on to Egg. And a mystery knight with designs on an even bigger prize soon throws the entire affair into chaos. 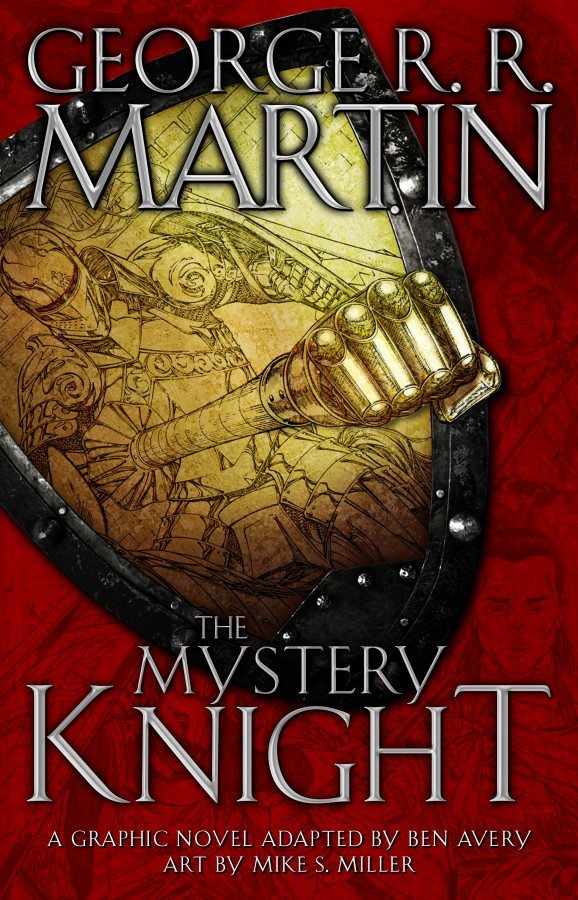 The world and history of Westeros that George R.R. Martin created is vast with many interesting stories than the one told in his A Song of Ice and Fire series. One of those stories is his ‘Dunk and Egg’ saga, taking place roughly 100 years before the events of A Game of Thrones that follows a hedge knight named Duncan the Tall and his squire Egg, secretly the Targaryen prince and future king of Westeros Aegon V. Each of his ‘Dunk and Egg’ stories have also been adapted into graphic novels and the latest, The Mystery Knight: A Graphic Novel, sees the pair stumbling upon a treasonous plot to the crown at a wedding.

Adapted by Ben Avery, the script condenses Martin’s story nicely, moving things along at a brisk pace. Dunk and Egg’s tales, as well as the Blackfyre Rebellions, are recounted in A Song of Ice and Fire, but only briefly. Any new readers may be a little lost at the beginning, but Avery does his best to recap Dunk and Egg’s first two adventures, along with the backstory, quickly and succinctly. After the beginning, its easy to get drawn into the story as it becomes clear that there is something more going on than a simple wedding and jousting tournament.

After everything that we’ve seen in A Song of Ice and Fire and Game of Thrones, it’s interesting to see a point in time where the Targaryens were at the height of their power. There is also a refreshing change of perspective in this story as well. We’re so used to seeing things through the eyes of noble lords and ladies in Martin’s epic that we don’t often see through the eyes of the common folk. While there are still high lords abound in The Mystery Knight, the primary focus remains largely on how common hedge knights view things and get drawn into the big events of Westeros’ rulers.

Dunk helps explore this viewpoint the most. Not only is he a common hedge knight and treated as such by lords, but he displays he’s much more comfortable around commoners. Its an interesting paradox, given the destiny that awaits Dunk later in Martin’s mythology. Likewise, Egg serves as a good balance of both worlds, having to pretend to be a squire in order to remain hidden from his families enemies and getting a good understanding of how ordinary people live. The pair have good chemistry with each other and help ground each other, balancing out their more negative aspects (Egg’s stubbornness, Dunk’s lack of recognizing threats).

There are a lot of characters in this story, which should be no surprise to anyone who reads or watches the saga, so sometimes names can get lost in the shuffle, but there is a good balance to the supporting characters. Aside from Dunk and Egg, some others are vital to A Song of Ice and Fire’s mythology. Its very interesting to see them in their early days, particularly Egg, whose youth and dedication to his family will later shape some of the defining moments in Westeros.

Mike S. Miller’s art is well done. For all the characters that appear throughout the story, Miller makes each one distinct, which helps the reader keep track of the characters even if they forget the names. The details on their facial work is nicely done, as is the imagery of the knights jousting and battling each other. There’s an extended fight sequence later in the book that is depicted well, with the action flowing easily from one image to the next. J. Nanjan and Sivakami Mohan’s colours compliment Miller’s illustrations, giving the book a vibrant look with a lot of great colours that pop off the page.

Fans of A Song of Ice and Fire and of comics will enjoy The Mystery Knight: A Graphic Novel and newcomers should also enjoy exploring a time in Westeros history that has only been discussed in the books. Avery’s adaptation of Martin’s novella works well in exploring Dunk and Egg’s adventures and relationship and is greatly helped by the art of Miller, Nanjan and Mohan. It is definitely a good and fun addition to the world of Westeros.