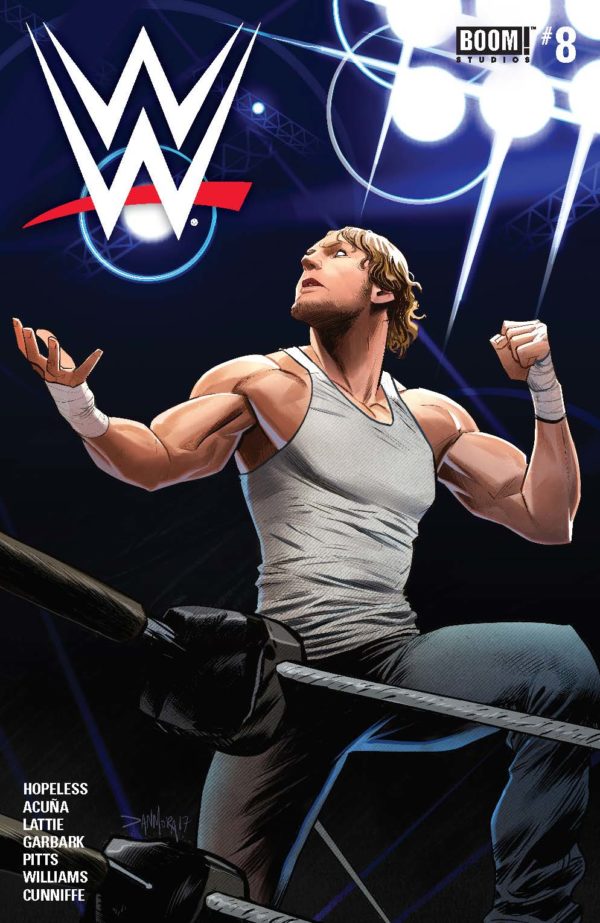 With the help of Sasha Banks, the Lunatic Fringe embarks on his own fury road to snag the Money in the Bank briefcase that is rightfully his.

SEE ALSO: Check out a preview of the issue here

Boom! Studios latest comic book WWE #8 closes their Dean Ambrose arc in a surreal and highly enjoyable fashion, starting out with a bonkers car chase involving Ambrose, Sasha Banks, The Wyatt Family and Charlotte Flair and finishing up with Ambrose’s famous victory at Money in the Bank 2016.

Being a wrestling fan, by and large, involves extending your disbelief, and this comic in particular takes that one step further. The opening sequence, which sees all the aforementioned stars racing to get to the Money in The Bank Pay-Per-View is an utterly bonkers extension of all of the characters involved.

Dean Ambrose has been a stand out character in these comic books, precisely because they have opted to take what is good about his character on screen and turn it up to 11. The Lunatic Fringe actually lives up to his name, and it’s hard not to shake the feeling that if the WWE really committed to that character, then Dean, who is arguably the most talented of all the Shield members, could have been a much bigger star than he is. 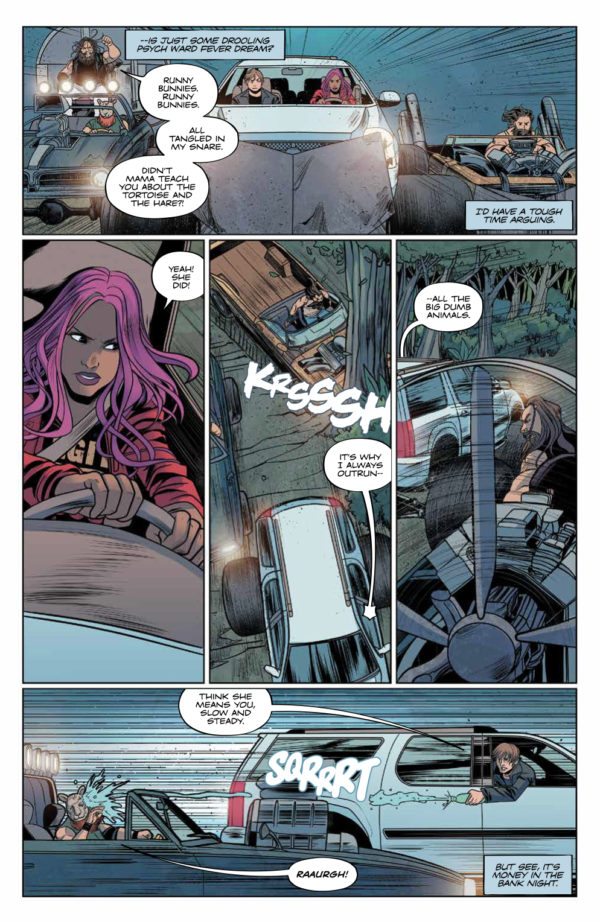 Dennis Hopeless’ writing is also on top form, with the exchanges between the characters fitting the situation nicely and also sounded like something that would actually be said by the wrestlers involved.

The sequence may not be for everyone, though, and for those who are looking for more in-ring stuff, the closing segments will prove much more rewarding, with Dean getting to the Money in the Bank event and winning the briefcase. There is a suitably insane cameo from Brock Lesnar chucked in for good measure.

This month’s edition of the comic also features two artists, with Tam Lattie working on the opening part of the comic, and Serg Acuna taking over in the latter stages. As usual, Acuna manages to bring the in-ring action to life with his usual flair, while Lattie brings a high intensity to the earlier proceedings. Every frame and character are pretty much spot on. One shot of Charlotte Flair is slightly questionable, but that is a small gripe in an otherwise very effective comic book.

The supporting story ‘The Gravest Mistake’ is a look at The Undertaker and Paul Bearer as they prepare for Taker’s match with Kamala at Survivor Series 1992. It’s a moody piece with some great artwork from Kelly Williams and Dee Cunniffe. The Undertaker is the perfect wrestler to use in a comic book, and this, alongside with the piece from Boom! Studios’ SummerSlam Special 2017 really makes the most of that.

Overall, WWE #8 is a fun way to close out Ambrose’s side of the story. The opening sequence may not be for everyone, but for those who enjoy the more surreal elements of WWE, there is a lot to enjoy here.