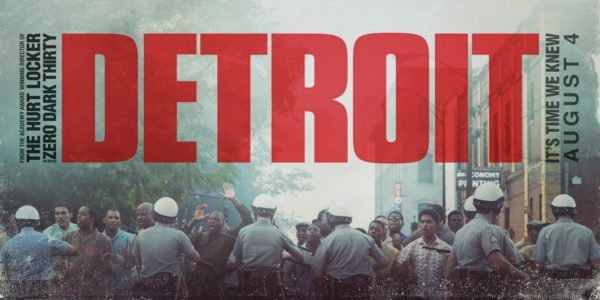 Recent events in Charlottesville hung over the room at the London press conference for Kathryn Bigelow’s Detroit.  But they were far from being the elephant in the room that nobody would talk about.

Director Bigelow, along with cast members John Boyega, Will Poulter, Jack Reynor and Hannah Murray, tackled questions head on about the relevance of the events depicted in the film.  Set in Detroit in 1967, it covers the riots in the city and the murder of three young African Americans.  The film’s historical accuracy and attention to detail in telling the story was of equal importance to director and cast alike, with John Boyega relating how he met Melvin Desmukes, who he portrays in the film, and Bigelow describing how the real Julie (played on screen by Hannah Murray) was on set with her every day during filming.

There was, however, room for some lighter moments, with Boyega and Poulter having something of a bromance as they recalled occasions when they’d both auditioned for the same part.

Listen to the full press conference below…

The true story of three killings during the Detroit Rebellion of the summer of 1967. While the city was under curfew and the National Guard patrolled the streets, three African American men were murdered in the Algiers Motel. Another nine people – seven black men and two white women – were brutally beaten.