Cersei Lannister – Dead men, dragons, and Dragon Queens… Whatever stands in our way, we will defeat it. 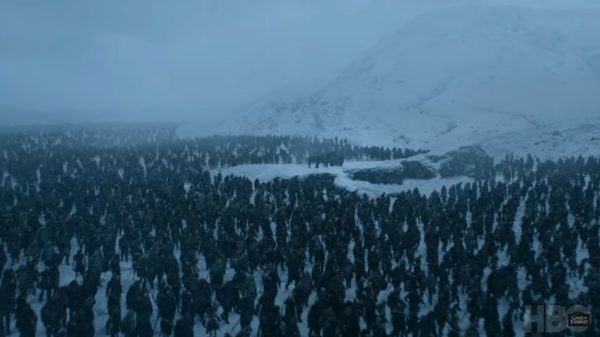 After last week’s “The Spoils of War”, Game of Thrones this week has a pretty high bar to reach up to.  This week’s episode, titled ‘Eastwatch’, has got a lot of work to do to beat a truly piece of brilliant fantasy television and with the trailer offering glimpses of even more dragons and a brooding Tyrion perhaps we’ll get to see this.

The aftermath of the Battle at the Reach is taken in by the Queen’s Hand – Tyrion – as he wanders amongst the burnt ashes of both men and horses, seeing the devastation that his Queen and her dragon achieved in a very short amount of time.  The Dothraki warriors, when not gathering the worthy spoils from the dead, begin to round-up the surviving Lannister troops to bring them to their Queen.

Daenerys informs these troops, previously loyal to the Lannisters, if they bend the knee she will let them live, otherwise they’ll face execution.  It’s here that Lord Randyll Tarly decides his changing of the Queens stops at Cersei and chooses execution.  Tyrion attempts to dissuade Daenerys from his execution, even going so far to suggest he takes the Black and goes to the Wall.  This fails, growing worse when Dickon also refuses to bend the knee, and both Father and Son are burnt to ash in seconds by Drogon at the command of Daenerys. 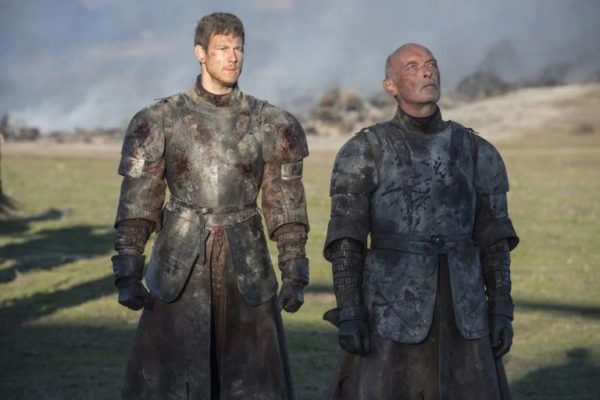 Elsewhere and out of sight, Bronn has pulled Jaime out from the lake, and they discuss the past massacre and what’s to come; Bronn – rather wisely – doesn’t want to get involved in future fights that include dragons.  Jaime makes haste for King’s Landing to break the news to Cersei. However, upon his return home, dragons aren’t the only thing troubling her as old wounds are opened when she’s told of the real murderer of her son Joffrey.

Back at Dragonstone and Daenerys has returned, meeting Jon on the cliffs and here Jon removes the glove from his hand and carefully strokes Drogon’s nose.  To the surprise of the Queen of Dragons, her Drogon seems somewhat calm about all of this.  As both Queen and King walk away, Daenerys begins to question what Ser Davos meant about Jon Snow taking a knife to the heart, but before he can truthfully explain the Queen’s old friend and protector Jorah Mormont is brought to her by a number of Dothraki guards.

Up at Winterfell Bran is scouting with a conspiracy of ravens. They fly for miles and then as they pass Eastwatch they come across the Army of the Dead.  As Bran swoops the birds in lower the Night King realises that the Three-Eyed Raven is peering in on his travels.

Sansa is beginning to receive complaints about the absent King of the North and also many wishes from surrounding Lords who would have preferred to have seen Sansa as Queen of the North.  As Sansa departs the main hall, Arya follows closely behind and questions Sansa’s lenient response to the rather negative comments towards their older brother.  As Sansa defends herself, attempting to instruct Arya in diplomacy rather than her normal assassination way of life, before Arya brings up the buried thought in her eldest sister’s mind – of her actually wanting to be the Queen of the North.

Later Arya finds the source of the numerous Lord’s negative thoughts towards the new King of the North, as Lord Baelish is skulking around in the shadows whispering in ears.  He’s later seen requesting the note Sansa sent to Robb after King Robert had been killed and Joffrey had Ned charged with treason.   After hiding this in his room Arya breaks in to discover what Littlefinger is hiding, though she’s unaware this true master at deception is watching his bait be bitten from afar. 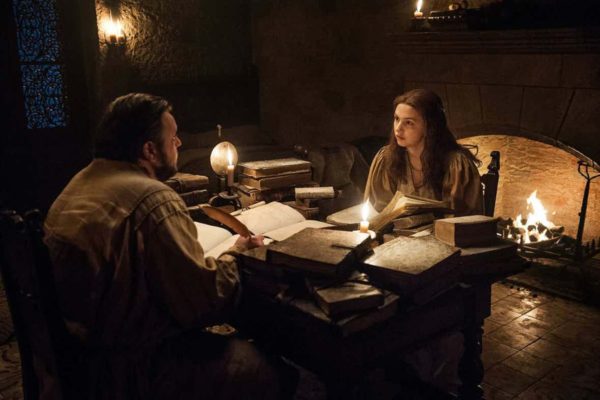 In the Oldtown Sam, unaware that he is now the last male Tarly alive, overhears the Archmaesters discussing a message received from Bran at Winterfell which mentions the oncoming Army of the Dead.  With the Archmaesters debating the seriousness and legitimacy of the message Sam can no longer hold his tongue, opening up to them all about the power the Maesters hold, if they would just take action and alert the houses across Westeros that the Army of the Dead is real.  Archmaester Ebrose seems to be the only one hearing the desperation in Sam’s voice, and promises to confirm with Westfell the legitimacy of the note.

Later in Sam’s quarters, after he ignores some rather groundbreaking information from Gilly he decides he can no longer be part of gathering history.  Collecting as much relevant information as he can bundle into his arms – from the Library – he, Gilly and Little Sam leave the Citadel.

At Dragonstone, Varys has received the sealed note for Jon Snow regarding the Army of the Dead, though as he’s waiting to give it to him he’s talking Tyrion about the recent execution at the Reach, weaving them into the times he too served the Mad King who also would burn those who stood against him.  Varys convinces the Hand of the Queen that he needs to getting her talking, instead of executing by flame. 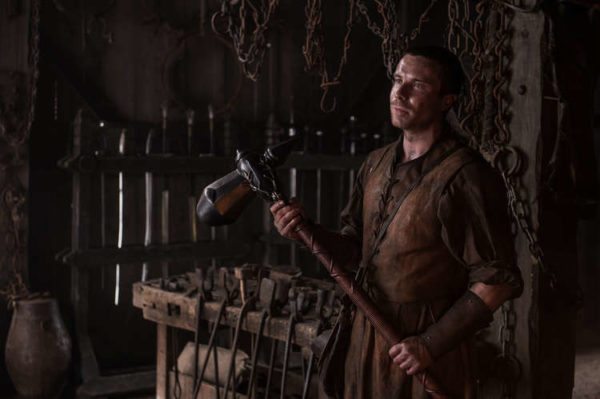 Back at King’s Landing and Ser Davos has smuggled Tyrion back and Bronn sets up the meeting between the two brothers about the Army of the Dead.  Elsewhere, The Onion Knight is walking the streets of Fleabottom in search for King Robert’s Bastard and when he finds Gendry, the young man is ready to go into battle, armed with a warhammer that would his make his late father proud; it even has a Baratheon stag upon it.

Returning to Dragonstone, and with Jon aware that the Army of the Dead are marching on Eastwatch, Ser Davos is keen to keep the lineage of Gendry secret, but loses hope as both bastards greet each other. The plan comes into motion to show Cersei that the White Walkers are a threat by bringing a Wight to her, and the team comes together initially with Jorah Mormont, Jon Snow and Gendry.  As they reach the Wall, they meet up with Tormund and the Brotherhood Without Banners, who Tormund had recently incarcerated for attempting to go beyond the wall.  With all men wrapped up in furs and armed they step into winter. 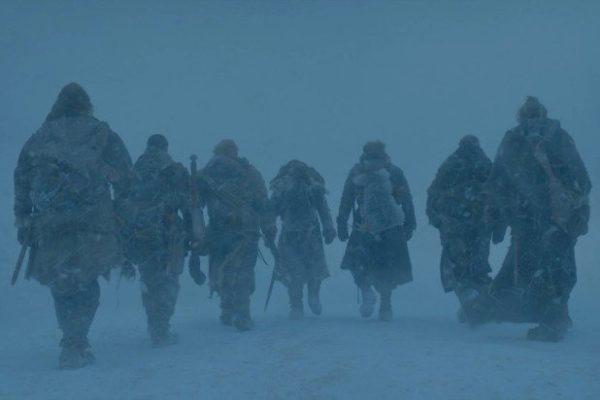 First things first.  What transport system do the people of Westeros now use?  They are zipping around left, right and centre in a matter of minutes.  I know this is the realm of fantasy and there are dragons in the sky etc., but people are moving rapidly from islands and towns in the blink of an eye.  Yes this season is shorter, but the speed people are going from pillar to post is get so fast now it’s becoming slightly ridiculous.

This aside, it was going to be extremely difficult to top “The Spoils of War” and I’m somewhat glad that we never received another battle instantly to try and outdo the last; instead we got to see our characters be smart, clever, devious, sharp, cunning, funny and lost.  This was a good episode, not groundbreaking, but it was a good slice of Game of Thrones.

It’s especially gratifying to see a key number of players on this board showing their true colours, particular Littlefinger, who seemed to be losing his footing with the Starks coalescing.  Not so though, as he’s begun to bait, whisper and manoeuvre family against family whilst quietly standing in the shadows.

Game of Thrones shows why it’s worth stopping your life for an hour to watch it as it airs, and to make sure that all notifications are off on your phone too to hide from hashtags and memes for an hour.

Oh and does Gilly now know everything?