When IM Global and Rebellion announced they were developing a Judge Dredd: Mega-City One series, it was met with a lot of excitement from fans, especially at the prospect of Dredd star Karl Urban returning to the title role. While it is still looking for a network, Judge Dredd: Mega-City One is in active development and has been for quite a while – as revealed in concept art for the series from IGN from Jack Eaves.

The first piece of concept art is titled ‘Democracy March’, offering a look at the advanced and very packed skyline of Mega-City One, complete with the Statue of Liberty in the background. This may be a reference to ‘America’, one of Dredd’s most important and fan-favourite storylines. 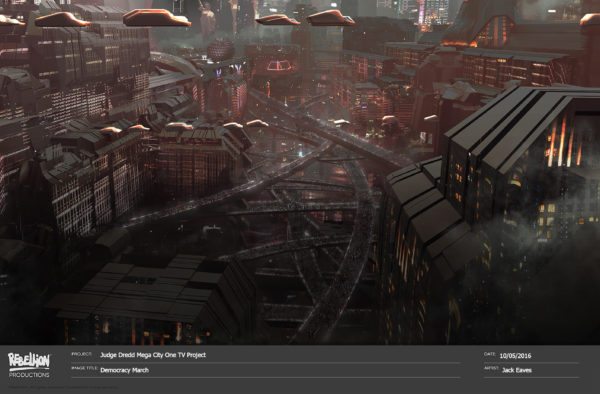 The next piece of concept art is titled ‘Lowlife Arrival’ and sees the Judges patrolling the lowest levels of Mega-City One. This could again be a reference to one of the storylines in the comics, this time ‘Low Life’. 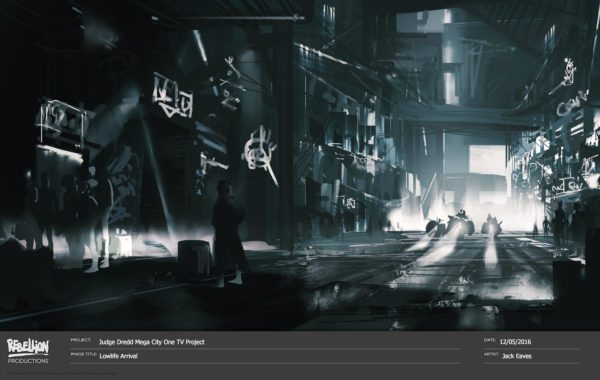 Its interesting to note that both of these pieces were completed late last year, showing that though the announcement of Judge Dredd: Mega-City One was made in May, this has been in the works for quite some time.

Meanwhile, speaking to Screen Geek, producer Jason Kingsley has confirmed that Karl Urban is in talks, with Kingsley stating that: “We have been in discussions with Karl about his possible involvement in Judge Dredd: Mega-City One for some time. These conversations continue but we’re keen, he’s keen,  it’s just a case of us making sure this show is everything we want it to be. his needs to be done right, the fans deserve it. Our team is working hard on scripts for the first season, creating engaging multi-thread storylines, one of which will be Dredd’s but others which take us into the wider world of Mega-City One.”