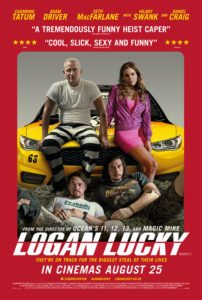 Out of work and with alimony payments to keep up, Jimmy Logan comes up with a plan to make some fast money.  He and his brother Clyde will rob the vault at the new NASCAR stadium nearby.  But they can’t do it alone.  They need an explosives expert and the best in the business is languishing in prison.  His name is Joe Bang.

Steven Soderbergh’s return is no big surprise: nobody ever really thought he’d stay away from the movies permanently.  His coming back was more a question of “when” rather than “if”.  He’s back with Logan Lucky, a film that, on the surface, sounds remarkably familiar – a heist comedy – but dig a little deeper and you’ll find something that’s more than simply a carbon copy of his most famous franchise.  Even if the local TV news in the background of one scene describes the robbery as “Ocean’s 7-11.”

One time wannabe football player Jimmy (Channing Tatum) now had a busted knee and takes any labouring job he can find.  His latest employer has just sacked him and he needs money fast to keep up the alimony payments.  Brother Clyde (Adam Driver) lost an arm during his second tour of duty in Iraq and works as a barman.  Jimmy’s plan to rob the vault at the NASCAR stadium is based on his own insider knowledge, as he helped build it before he lost his job.  But the pair need help: that explosives expert Joe Bang (Daniel Craig) who’s currently locked up in prison and Bang’s brothers Fish and Sam (Jack Quaid and Brian Gleeson).  Even with the team in place, Jimmy is all too aware that, as he writes in his checklist, “Shit happens.” 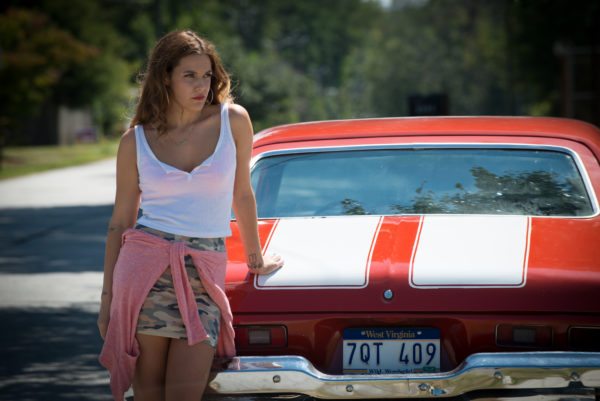 Soderbergh has assembled a superb ensemble cast.  Admittedly, it’s not the line-up of A-listers that went with the Ocean’s franchise, but the likes of Riley Keogh, Hilary Swank, Macon Blair and Katherine Waterston are all perfectly suited to this blue-collar heist.  On paper, Tatum and Driver make for unlikely brothers but on the screen they more than convince, with Driver’s slow speech and strange use of language creating little nuggets of comedy gold.  And any film that has the wit to finish the cast list with the line “And introducing Daniel Craig” knows it’s on to a winner.  Craig is simply brilliant, with his bleached buzz cut and striped onesie that’s compulsory attire for those who are, as he puts it, “in-car-cer-ated.”

While the Ocean’s franchise was all slickness and polished chrome, Logan Lucky is grubbier and all the more recognisable for it.  Everybody thinks the Logan brothers are stupid and unlucky yet, for once, Jimmy gets it right.  His plan to rob the vault – where all the money that’s been literally sucked from the punters is stored – works, after a fashion.  You’d think that the brothers simply don’t have what it takes to pull off a stunt like this.  And you’d be wrong.  Every dog, as they say, has its day. 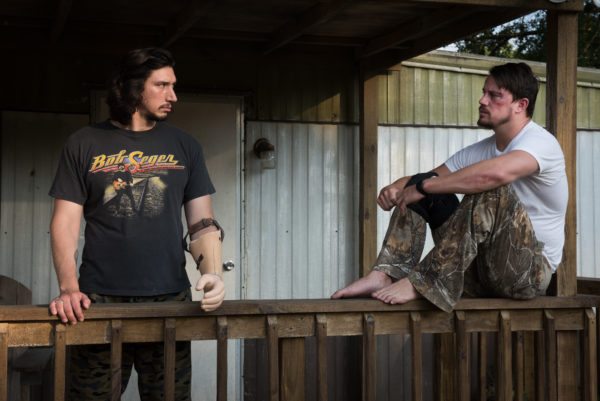 Even non-Soderbergh fans will find it difficult to resist this one, with its cheeky, knowing charm and consistent humour: smiles and chuckles turn into huge guffaws and the laughter simply never goes away.  It has its weaknesses – a tendency to lose its way towards the end and a shocking piece of over-acting from Seth MacFarlane sporting one of the worst English accents going.  But, those aside, this is a joyous crime caper full of character, wit and energy. And it’s easily one of this year’s best comedies.