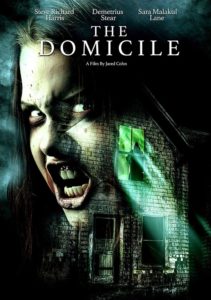 When Russell’s wife accidentally dies in their home, his mental state goes from bad to one of utter despair. As the ghost of his dead wife awakens, her spirit becomes aware of the sordid details surrounding his unfaithfulness, enraging this supernatural being to haunt him in every horrifying way imaginable. Written and Directed by Jared Cohn, The Domicile is a supernatural horror which follows the aftermath of tragedy. Struggling playwright Russell Brody is married with a child on the way. His wife dies after falling down the stairs (unbeknown to Brody, following a ghostly encounter). A year passes and his life is in tatters. His co-writer, David, suggests he reconnect with his former mistress. When Brody does, he finds himself terrorised by his deceased wife and must face up to his own past demons at the same time.

Writers it seems, in their very nature (occasionally introverted, or obsessive, particular etc) lend themselves well to the horror genre (as characters). I suppose someone like Stephen King probably set the notion with the likes of The Shining and Misery. Of course King probably drew on his own experience and pulled from his darker recesses in crafting a character like Jack Torrance (The Shining). The Domicile, owes a bit to King, by way of vintage supernatural cinema and Japanese horror. There’s nothing particularly new about The Domicile. Cohn has a fairly prolific CV for a relatively short time in the business and has largely stuck to horror. Whilst The Domicile is fairly run of the mill, it’s efficiently put together. It looks good. The production design, cinematography and direction are all solid, and the film (aided by an effective, if fairly standard score).

As far as the cast go, most are a little overplayed. Steve Richard Harris (Brody) and Demetrius Stear as his co-writer David, bro things up a bit too much. It’s a bit awkward and a lack of chemistry doesn’t help. Harris turns the notch up to 11 too often and borders on comical. Amanda Ruth Ritchie as the mentally unstable Samantha, and Sarah Malakul Lane as mistress Lucy perform okay. We never quite delve enough into anyone and many of the relationships feel insincere (partly script, partly actor chemistry). The short length of the film is paced oddly. Nothing that happens come the end feels like it has had sufficient build up. On a technical standpoint and as far as ticking off almost every expected beat of the genre, The Domicile musters a pass, but emotionally it falls short, and doesn’t do enough to demand investment from the viewer. In addition though, one other aspect that falls short is a pretty essential one. The scares don’t hit the mark enough. The atmosphere is there, the setting, the set ups and the photography, but the delivery of fear just falls short. In part the struggle to engage with the characters probably means you are not as involved in the film as Cohn requires to fully affect you.