September’s Games with Gold have been announced, doesn’t seem that long ago when were at the start of the year but with time going so fast it does have one advantage…. we will get to play this coming month’s Games with Gold quicker.   There are some good opportunities for gaming coming up this September as Gold will be bringing 2 racing titles, non-stop action with Battlefield 3 and a supernatural thriller.  Don’t forget, as usual the titles free for the Xbox 360 are also backwards compatible with the Xbox One. 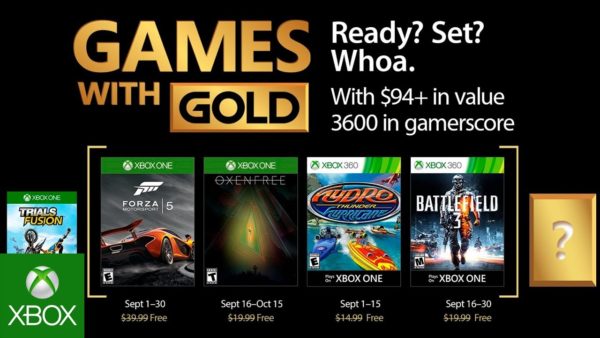 For the whole of September Xbox One players will be able to race to their hearts content in Forza Motorsport 5, not only that but there will also be the Top Gear Car Pack available.  From 16th September until 15th October there’s supernatural thriller Oxenfree.

For Xbox 360 and Xbox One players, if racing top end racing cars on the world’s best tracks wasn’t enough for you then enjoy some racing on water in Hydro Thunder Hurricane from the 1st to 15th August.  Hydro Thunder Hurricane puts players in the driving seat of a powerful speedboat and get racing through some strange situations.  From the 16th August players can take part in solo and multiplayer action in the award winning FPS Battlefield 3.   Remember that these 360 games are also compatible with the Xbox One.

Share your thoughts on this coming month’s games in the comments below.