Square Enix have announced that they will be releasing a remake of the 1993 classic Secret of Mana on Playstation 4, PS Vita and Steam on the 15th February 2018.  This remake will keep the essence that made the Mana series popular while adding high def 3D graphics, upgraded gameplay and other technical improvements.  Watch the new announcement trailer below… 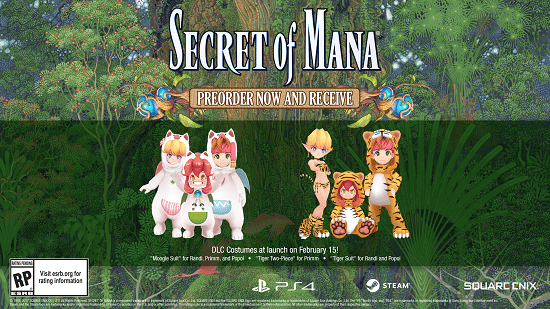 In Secret of Mana players follow the story of a young boy called Randi who has been given the quest of reviving the magical power of Mana.  Randi and his friends Primm and Popoi must befriend the eight elementals with the power that make up Mana and defeat the evil that is trying to prevent them doing so.

There are some nice pre-order bonuses with those who pre-order from the PlayStation Store gaining access to special character costumes: ‘Moogle Suit’ for Randi, Primm and Popoi, ‘Tiger Two-Piece’ for Primm and ‘Tiger Suit’ for Randi and Popoi plus they will also gain three PlayStation Network avatars.  Gamers who pre-purchase the game, or purchase the Day 1 Edition within one week of the launch on Steam will receive the same three costumes as above and also a downloadable wallpaper.

Secret of Mana will be available on the 15th February on PS4, PS Vita and Steam.