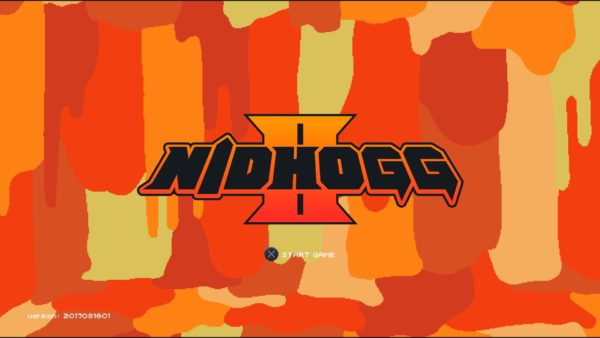 Nidhogg is a pick-up-and-play 2D fencer that harps back to the nostalgic days of 80’s arcade and NES games. It offers an enjoyable local multiplayer alternative to fighting games, primarily because your friends won’t need to know button layouts or move sets and the controls are incredibly simple. That being said, there’s an incredible depth of strategy in Nidhogg, it’s an easy game to play, but a hard to game to play well. As for its sequel, Nidhogg 2 is best described as one of those murky follow-ups that offers a small variety of upgrades, such as new weapons, ‘enhanced graphics’ and stages, but ultimately, it doesn’t feel like a step in the right direction.

First things first, the combat is near enough the same which preserves precisely why you’d want to play Nidhogg or Nidhogg 2. Players duel with an expanded variety of weapons this time, with crossbows and a much chunkier broadsword joining the line-up, in addition to the game’s returning Rapier. The weapon variety makes the gameplay feel more renewed and different, and does give you an incentive to pick different maps, but the new weapons also slow Nidhogg’s once brutal and aggressive combat down considerably. It’s a trade-off, but given the game’s sheer lack of variety sometimes, the additional weapons were needed, especially as it’s one of the only clear ways in which Nidhogg 2 differentiates itself from its predecessor in terms of mechanics. Besides that, the combat is pretty much untouched which is bittersweet because the gameplay is still fantastic, but it still feels as if it needed more of a shake-up. 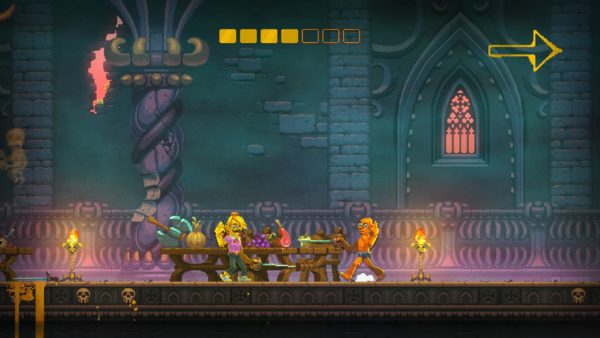 The single-player mode returns with more maps and more variation, but the A.I is still brings the arcade mode down a bit. Simple things like the A.I waiting for you to attack it, when it’s already leading the descent into your territory is a bit baffling, as there’s absolutely no incentive for it to wait for you to catch-up. When the difficulty spikes, you find yourself abusing these A.I faults as a way to get ahead, which just leaves you feeling cheap afterwards. Unless you were planning to brush up on your fencing, there’s still not any obvious reason to jump into the game’s single-player.

In terms of playing with a pal, Nidhogg’s biggest strength is also still its worst enemy. Yes, the game is so easy for two completely unfamiliar players to jump in and immediately have fun, but its simplicity means that after a few matches, Nidhogg starts to feel played out. This varies depending on how competitive a match can feel with your pal, as that might keep things fresh, but eventually those same winning strategies will be used again and again to the point of staleness. However, for the price point and what Nidhogg brings to the table for such a small game, this is to be expected and not really a criticism.

The most baffling choice for Nidhogg 2is where the developers have taken the game’s visuals. The simplistic, stylistic pixel-men from Nidhogg made for a great atmosphere, and kept your focus on the gameplay which is only suiting for such an intense game. Instead, we’re now given goofy, cartoon-esque characters that are customizable, but it just doesn’t suit what the game is. I appreciate the stages look great and everything is higher res, but it just don’t quite fit in terms of tone. There’s also a larger problem here, as the game’s bright and sometimes garish use of colour can be distracting, which is a shame in a game which hinges around concentration and focus. I appreciate better graphics, but they could have easily still maintained that brutal, Highlander-inspired tone that the new visuals seem to abandon. 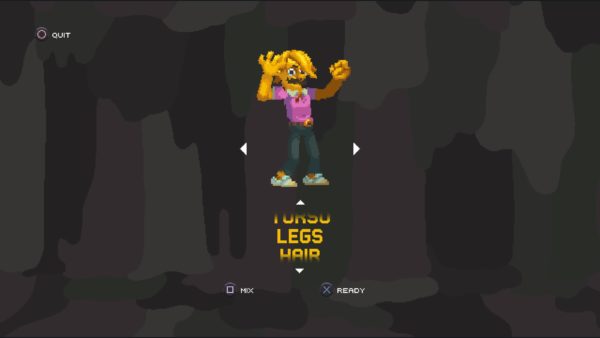 Character customization is nice, but it simply doesn’t suit the concept of Nidhogg

Nidhogg 2 is still a great game, purely because of what it inherited from the first entry. The new visuals may be more up your alley, or they may make you feel slightly nauseous like I did, but it’s hard to call it a deserved sequel because there aren’t any clear improvements. If you fancy a laugh with a few friends, it still does the job.