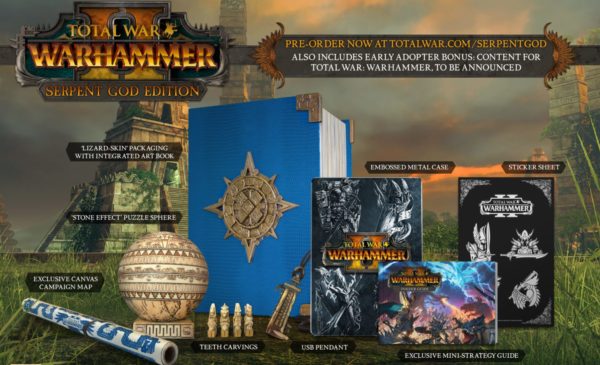 The Serpent God Edition of the game will come in a scaled turquoise presentation box replete with stone-effect glyphs to provide an authentic Lizardmen feel.  Aside from the Total War: Warhammer II game, this edition will contain a limited edition embossed metal case which shows the symbols of the 4 races, a canvas map created with a very strong Lizardmen theme that shows the campaign map, a Saurus Blade necklace with a hidden 4GB USB memory stick, a stone effect Puzzle Sphere that allows you to keep your private items within, 4 carved Bone-like totems representing the four races, stickers, a handy insider guide providing hints and tips and it goes without saying, the ever present Art Book.

Those who preorder will gain the Norsca race pack for the original Total War: Warhammer (that will include a new Race, two new Legendary Lords and lots of monstrous units).