A new game based on a 11 year old boy’s vision arrived on the Apple App Store today thanks to a partnership between Make-A-Wish and Texas based developer, Bottle Rocket.  Planet SRAM is the brainchild of Hunter, a young boy with a severe heart condition who shared his idea with the team at Bottle Rocket for a single player action game where survival is key. 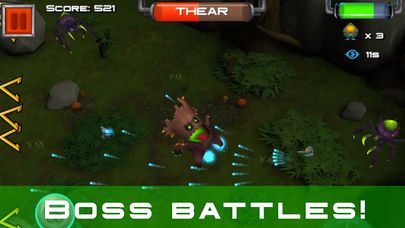 Planet SRAM is a top down action game that takes players to a strange alien planet filled with “out-of-this-world” characters and monsters (such as a tree monster that fires snakes at your player).  Players are not without protection and a number of weapons and cool upgrades.  All the creatures and game levels have been imagined by Hunter and were shared with the developers during a full week of whiteboard sketching, feature ideation and game development.

“When we first heard the story of Hunter and his wish, we couldn’t have been more excited and honored to become a part of this journey,” said Calvin Carter, Founder and CEO of Dallas-based Bottle Rocket. “Looking back on our time with Hunter, it is still one of our proudest moments as an organization. The fact that we were able to leverage our craft and passion to help make his wish a reality means the world to us. I’m so excited that the rest of the world can finally see Hunter’s imagination and creativity for themselves.”

“It was his dream come true and everyone at Bottle Rocket really made him feel special,” said Hunter’s mother Erin. “He had always wanted to make video games and this definitely helped him solidify his career goals. He will be attending a magnet school where his focus will be game design.”

Planet SRAM is available on the Apple App Store now.