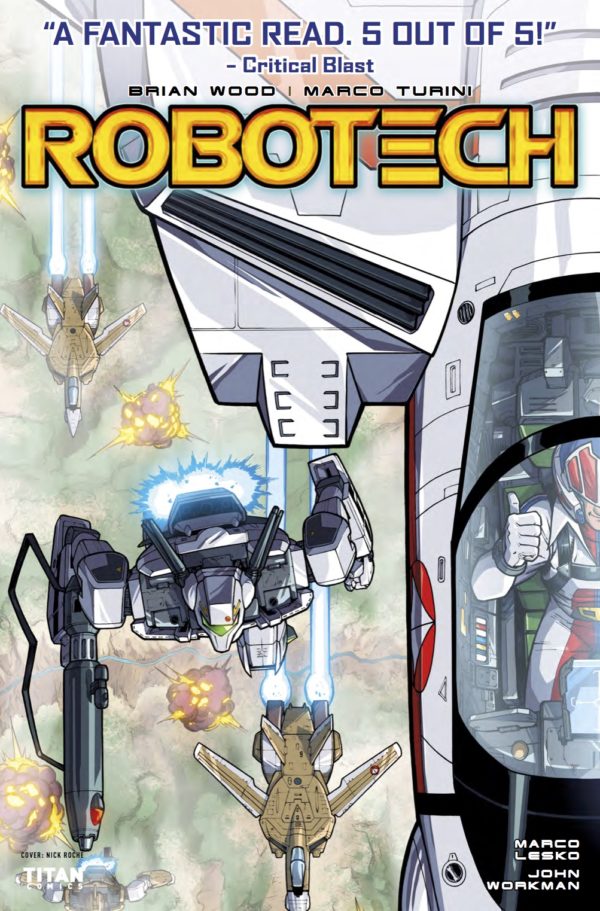 Ten years ago, a massive ship crashed on Macross Island in the South Pacific. In the intervening years, the people of Earth have used the ‘Robotechnology’ from the ship to signi cantly advance their own technology.

On the launch day of Earth’s Super-Dimension Fortress One (the SDF-1), Earth is attacked by mysterious ships which appear in space and deadly ‘Battlepods’ are dispatched…

Talented young pilot Rick Hunter has been caught up in the events and has taken a Veritech ship (an advanced ghter jet enhanced by Robotechnology). After meeting a girl named Minmei, the pair come face to face with a giant alien being…

Robotech #2 opens up directly where the last issue left off: Rick Hunter is piloting a Veritech ship with bystander Lynn Minmei in tow staring down an enormous alien being that detached itself from the enemy ship he just destroyed. Meanwhile, Captain Henry Gloval is figuring out a way get the SDF-1, and the citizens of Macross Island, to safety on the double.

Rick Hunter definitely comes off as a Maverick-lite in this series. Full of snarky quips, quick to break the rules, but a damn good pilot. Only this time we don’t really have anything to go by other than that Commander Roy Fokker is his brother (we know because he keeps calling him “Big Brother”). Commander Fokker is also full of ’80s machismo, which perhaps was by design. In fact, most of these characters feel pretty cliche, and one-dimensional. Renegade kid? Check. Decorated older brother who is a stickler for the rules? Check. Grizzled Commander who likes to smoke? Check.

The characters falling a bit flat is due in no small part to the underwhelming art. Characters have little to no facial expressions. An angry character is likely to have the exact same face as a happy one. The big exception in this issue is Doctor Lang, who is drawn comically angry. He looks… well… constipated. The villain is fairly unremarkable with nothing to really set him apart from any space villain introduced in the past 40 years. Perhaps the worst example of the bland illustrations are the women. Almost every woman’s body aboard the SDF-1 is a carbon copy of the others with a different skin tone and face. Busty with an hourglass figure. The men are drawn a bit more varied, but there is little variation with the women here. Most were clearly drawn as eye-candy. Which is a shame to see in 2017. Just because this is based off of an old franchise, doesn’t mean it can’t be altered to fit the times. If only a little.

The art also makes the action a bit hard to follow. I often had to squint to figure out what, exactly, was happening. For example, When Commander Fokker is pinned down by an alien in his Veritech suit, I could have sworn his brother Rick shot the alien from behind. Not so. Looking back, Fokker blasts him through the chest. It’s not immediately clear. Moments like these often made me have to do a double-take. It’s occasionally due to colors in the background matching the focal points of the panel, masking them. Is that a laser coming from the enemy ship, or just part of the background (both a shade of green)? Hard to tell. The same can be said for when Rick crashes through the SDF-1 up in space. The panels simply do not convey the action smoothly.

On that note, things got way more interesting once everyone was up in space. Once Captain Gloval “folds space” and gets everyone out of harm’s way. The panel of Rick stuck in his stolen Veritech ship, wiping away frost to see where he and Lynn ended up was pretty striking. It showed me that perhaps things will start heading in an interesting direction. Sure, the introductions have been clumsy, but it looks like events are officially in motion.

Unfortunately, two Issues in, I’m still somewhat underwhelmed. The comic feels written by, and only for, diehard Robotech fans. If you go into this series as a longtime fan, I think there may be a lot to like here. If you are like me, hoping to get into the series by picking up the comics, you may be disappointed. Standing on its own, Issue #2 does little to slow the pace down for the sake of character development, and the characters themselves fall a bit flat, often speaking with cringey dialogue. The plot is going in an interesting direction, but that matters very little without compelling characters and dialogue. Again, it’s tough to say if these character choices are purposeful, or just a result of lazy writing. Robotech started way back in the early ’80s, and these characters and archetypes could simply be throwbacks to the era. If that doesn’t bother you? If you are a fan of the early series? Dive in. There is possibly something here that newcomers won’t readily see.