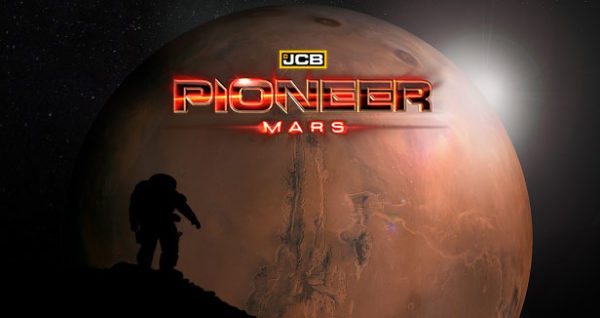 In JCB Pioneer: Mars players awake after their spaceship crash lands on Mars.  Surrounded by the wreckage of the spacecraft and vulnerable to the planet’s hostile environment players must do what they can to survive and start the foundations of a new settlement.  As well as needing food and water players will also require oxygen to survive but once an oxygen source has been established players can start to settle Mars and create outposts, life support infrastructure and mines and even research new tehnologies.  To help players with construction there will be the opportunity to use futuristic, heavy-duty construction and mining vehicles specifically designed by actual JCB Engineers.

“JCB Pioneer: Mars brings the harsh reality of the red planet to life with detailed high definition graphics, vehicle physics and weather effects as you prepare Mars for human colonisation,” said Andy Santos, Design Director of Atomicom. “Launching with over 20+ hours of content, we are excited to hear the player response that will shape our future development roadmap.”

“At JCB, innovation is in our lifeblood and we are constantly exploring new thinking and JCB Pioneer Mars provides a vision of the tools needed for future space colonisation”, said Worldwide Marketing Director, Michael Plummer. “It’s been an incredible experience for our visionary design team to build a series of futuristic heavy-duty construction and mining vehicles, optimised for exploration and mining on Mars”.

JCB Pioneer: Mars is available now on Steam with a 10% discount until 8th September.