The latest gameplay trailer from Creative Assembly for their upcoming strategy Total War: Warhammer II reveals an epic battle between the cold blooded Lizardmen and the plague spreading ratspawn, the Skaven. Watch the video below… 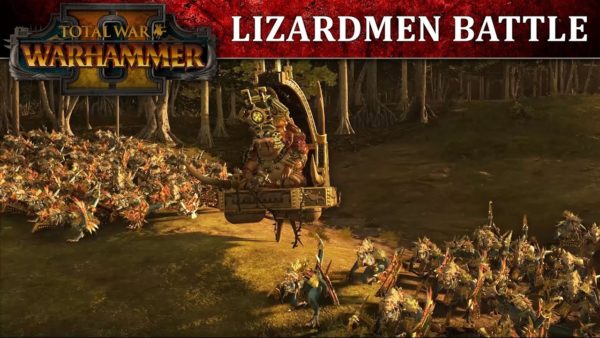 Leading the Lizardmen army is the oldest of the Slann (still living ones that is) Mazdamundi accompanied by his loyal and strong Temple Guard which are equipped with the best armour.  Also on the Lizardmen army are Chameleon Skinks, Pteradon Riders, Cold One Riders and for that added element of fear for the Skaven are the Kroxigor and monstrous Carnosaur.

Although the Lizardmen force sounds formidable the Skaven will not be a pushover as their force consists of countless Skaven troops, Plague Censer Bearers which can cause a huge debuff for the Lizardmen, several Warp Lightning Cannons and the terrifying Hell Spawn Abomination.

Today we join Mazdamundi. Defending the Amaxon Plain in a chokepoint battle on the Eastern Coasts of Lustria against a Warlord and his Skaven hordes. Ever since the arrival of the rat-spawn in Lustria, the Lizardmen have vowed to wipe this race and their foul presence from the face of the new world.

Total War: Warhammer II is due for release on the 28th September.