Creative Assembly have released a new video revealing some of the campaign gameplay for the High Elves in the upcoming Total War: Warhammer II.    During this gameplay video we follow the campaign of Teclis as he defends his territories during his attempts to perform a ritual.  Watch this new video below… 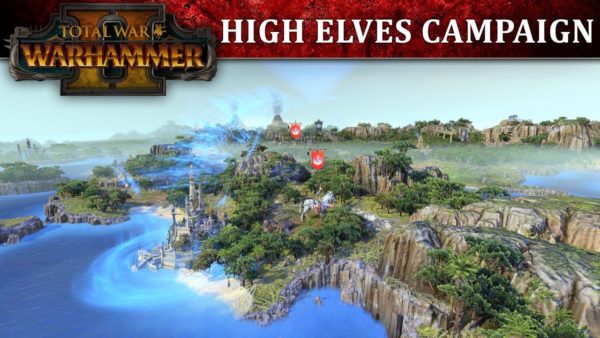 The High Elves are a proud and noble race and nothing like their treacherous Dark Elf cousins but they are quite snobby and tend to view other races as significantly less important than themselves.  In Total War: Warhammer II the High Elves can be led by either the tall and imposing Tyrion whose skills with the blade are tough to equal, or the mighty sorcerer Teclis.

The High Elves have an impressive array of skilled warriors at their disposal and their infantry units include High Elf Spears, Swordmasters, Phoenix Guard and the White Lions of Chrace.  The White Lions come equipped with a great axe and a Lion Cloak which can deflect any missiles.  Their missile based units include Elves with Long Bows and the Lothern Sea Guard, these units will be equipped with longbows and spears making them a threat at a distance and close range.

High Elves also have access to a variety of monsters including dragons and the devastating Eagle Claw bolt thrower which can either shoot a powerful bolt at a single enemy or 13 weaker bolts in a scatter shot.