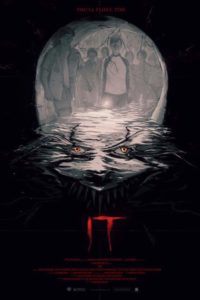 In the late 1980s in the small New England town of Derry, local children are disappearing into thin air.  A group of seven kids, known locally as “The Losers’ Club”, each have horrifying encounters with a malevolent clown and are determined to kill him and discover why the other children have been vanishing.

Just three weeks ago, the adaptation of Stephen King’s The Dark Tower was met with a chorus of disapproval.  That resounding thumbs down also prompted even more speculation about the next King novel to arrive on the big screen.  It.  Now it’s here – and now we know.

Put the TV series to the back of your mind.  Admittedly, it’s hard to put Tim Curry there because he’ll always be associated with Pennywise, the shapeshifting clown.  But this time round we have a version of King’s story with something even more sinister at its heart, a darker tone and some striking set pieces.  Setting it in the late 80s taps into the nostalgia that goes with Stranger Things, and the group of early teenage friends evoke memories of Stand By Me.  This time, however, there’s seven of them, a tall order for director Andy Muschietti and his writers to turn into distinctive characters in their own right.  And they just about pull it off.

They’re all damaged in their different ways.  There’s Bill (Jaeden Lieberher), convinced his little brother Georgie (Jackson Robert Scott) is still alive, despite his disappearance and the trail of blood leading to the roadside drain.  There’s Beverly (Sophia Lillis), unfairly saddled with a salacious reputation and, as one distressing moment makes clear, abused by her father.  And all of them are targets for the local bullies, a trio of older boys with Henry (Nicholas Hamilton), the local cop’s son, as their ringleader.  They also all have their own personal fears, which are set out in the early part of the film.

All of which gives Pennywise (Bill Skarsgard) plenty to feed on, physically and emotionally.  But the film isn’t just about their battle against their fears and the evil in their midst.  It’s also a coming of age story, one of King’s most familiar territories.  Just as familiar as the Maine setting and the foreboding tumbledown house on the edge of town.

As a horror, it’s successful enough at delivering the frights – up to a point.  The jump-out-of-your-seat moments are thin on the ground, replaced instead by longer build-ups to violent set pieces, some of which leave little to the imagination.  Perhaps the most spectacular is Beverly’s blood soaked encounter in her own bathroom, one that only she and her friends can see.  You won’t necessarily grip your seat in fright, but chances are you will sit further back as what you’re watching sinks in. 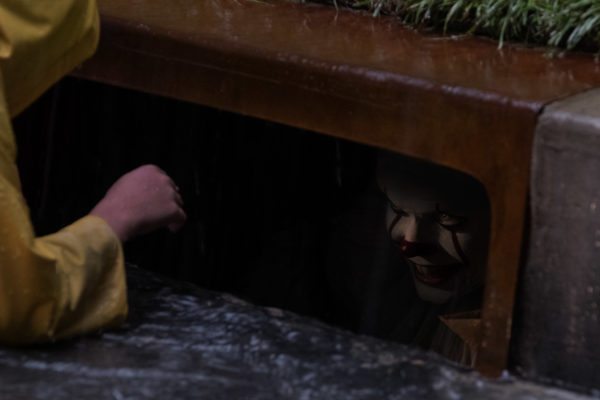 Skarsgard is a gloriously malevolent Pennywise, with his striking make up, sing-song voice and almost constant dribble from his huge lower lip which makes your skin crawl.  And the kids are worthy adversaries, not little angels from a Disney world, but flexing their swearing muscles and constantly cracking jokes about sex and genitalia.  Richie (Finn Wolfhard from Stranger Things) has the lion’s share of the sexual humour: it’s all he ever thinks about, yet you know that if a girl ever showed any interest in him, he’d run a mile.

It is bound to please King fans.  Faithful to the spirit of his novel and to his adult audience, it makes for an exciting, if not always spine-tingling, ride. This is labelled as Chapter One. Now that Chapter Two, which is the adult part of the story, has been announced, you can put me down for that!