Square Enix has announced that their platform adventure game Spelunker Party, the latest in the Spelunker series, will be released on the Nintendo Switch and PC on the 19th October. 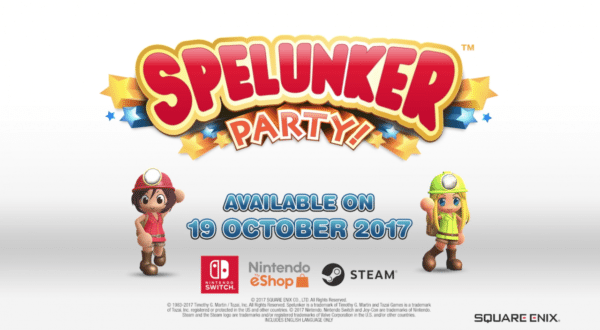 Spelunker Party will follow the story of Spelunkette and his friends as she sets out on an adventure deep into the Earth.  Those players who take up the adventure will face 100 challenging stages that find Spelunkette searching for hidden Litho-stones in order to progress.  Items,equipment and even faithful pets can be unlocked to help you survive the pitfalls, boulders and enemies that await.

Those who decide to explore the depths will be able to go solo or tag along with three other players in both local and online multiplayer modes where teamwork will be essential to overcome the dangerous obstacles that await.

Go on a Journey to the underground with your buddies! The great adventure of Spelunker, the Weakest Action Hero begins in Spelunker Party! Embark on group expeditions in Offline and Online Co-op Multiplay with up to 4 players! Overcome thrilling challenges with Time Attack, Quests and more! Enjoy Spelunker Party together! Arriving on Nintendo Switch & Steam from 19th October 2017.

Spelunker Party will be available via the Nintendo e-Shop and Steam on the 19th October.