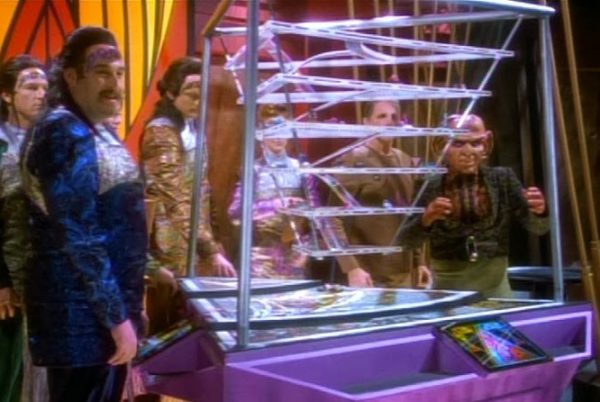 If I’m being honest I wasn’t much of a DS9 fan.  At the time of it’s airing there were two camps: Babylon 5 and Deep Space 9.  I started with DS9, but eventually the pull of grime, dirt and Vorlons dragged me over to the darkside.  Seeking out a poor episode of DS9, I had to turn to a cluster of Trek fans over on the Star Trek Facebook group and a couple of titles reared their head once or twice, so I watched both.  It’s fair to say watching them didn’t win any points for DS9.

‘Move Along Home’ starts as it means to go on, stuck being a nothing episode, with a First Contact situation being rocked for Sisko because Dr. Bashir can’t find his ‘Dress Uniform’. Though a) it’s not a First Contact for the Vulcans have already achieved this, as mentioned early in the episode, and b) you’re in a grimy corridor, it’s not exactly the Ritz.  It doesn’t get any better when the airlock opens and the Wadi actually arrive, looking like extras from Buck Rogers in the 25th Century.

With the Wadi insisting on playing games, and already having knowledge of Quarks, Sisko takes them to the Ferengi’s establishment to play a few games of Dabo.  As the night draws on, Sisko becomes bored and leaves the guests in Quark’s hands, where the Ferengi promptly tries to cheat the Wadi, who are on a winning streak.  The Wadi delegation aren’t happy with this and setup their own game called Chula, which – unbeknownst to Quark – places Sisko, Dax, Bashir and Kira as the pieces on the board.

What follows for us the viewers is watching a confused Quark take part in a nonsensical game, as the ‘Away Team’ are forced to play hop-scotch, drink orange juice, disappear by torch light and not die when they fall off a cliff.  Riveting stuff.

Granted this is Season 1, but look here – they’ve had all of seven seasons of TNG to perfect the script writing!  This episode is pure and simple bobbins!  To make matters worse, the delegation are left to go Scott free at the end, because Quark was cheating a Dabo!?

Another to miss – Profit and Lace. Ferengi feminism, Quark becomes a woman and women have hormones. 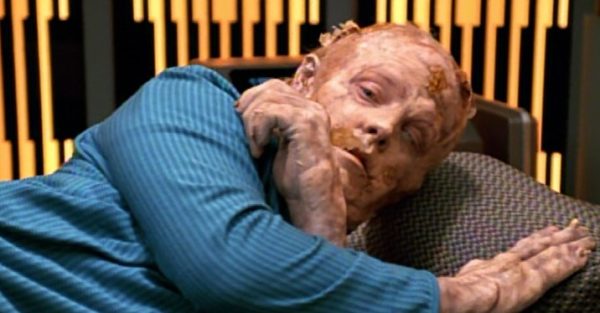 Here’s an odd one. On Voyager’s initial transmission I bought the videos on release up to Season 2, but I didn’t like the show.  I disliked the crew, disliked the Captain and thought the show was a rehash of poor scripts.  I even once, lost my temper with one poor soul who dared to say that Voyager was better than Babylon 5!

However, like a fine wine or cheese, this show has become much better with age.  Granted I still skip a considerable amount of Season 1 and 2.  The writers and producers, didn’t have a clue what to do with this ship nor its Captain in the beginning, but when the actors were allowed to breathe and when scripts like ‘Counterpoint’, ‘Year in Hell’ and ‘Equinox’ landed in their laps, they clearly knew what to do with them.

This all being said, there are some awful shards of darkness you don’t want to go near at all, and by far the worst of the bunch is a sweet little number called ‘Threshold’.

With the best pilot in the Delta Quadrant (heck any Quadrant!) deciding that breaking Warp 10 in a Federation Shuttlecraft is something everyone should try at least once, things don’t go to well for the once-convict.  Firstly thanks to a medical condition the doctor previously highlighted, he collapses, but this goes from bad to worse as his entire body begins to mutate.  First, he can’t stand the light, then water, then he can’t breath the air and then he dies.  Though not for long, for the second heart he’s grown whilst dead kick starts his body, but his hair begins to fallout. Tom Paris is rapidly mutating due to the Warp 10 travel.

Even with a forcefield around him and both the Doctor and Kes attempting to slow the mutation, Muto-Tom escapes and captures the Captain.  He then drags her aboard the new and improved shuttle and disappears at Warp 10.  Attempting to give chase, Voyager is pushed to its limits before it has to break off the chase.  Three days later they find the shuttle – planted on a planet – along with two lizard creatures with traces of human DNA, male and female, which have possibly mated.

Later back on Voyager the Doctor has used some Anti-Proton wizardry and they’re no longer Lizards – they’re back to their normal selves.  Hurrah! It appears what they experienced was accelerated evolution, the lizard-form is something we’ve all got to look forward to in a good few million years.

This episode is possible the worst piece of science-fiction you’ll ever see, and the only saving grace is knowing that Tom can never look his Captain in the eyes again.

Another to miss – Bride of Chaotica! It’s an entire episode based around Captain Proton and also any episode with Fair Haven in it.

These Are the Voyages… (Season 4 Episode 22) 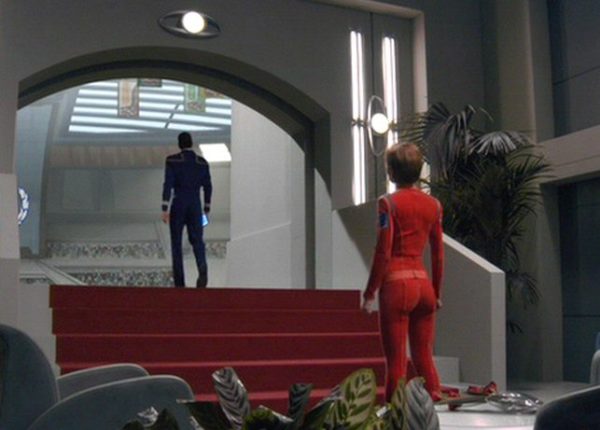 Now I was a fan of Enterprise. I know you’ve got to get past the tenor known as Russell Watson crooning “Where My Heart Will Take Me” every episode, but still the show gave us a true, hard worn, look at Starfleet reaching out into space.  It wasn’t all wine and roses and there were repercussions along the way, but it was good to see a Captain that wanted it all to work.  The problem is that it was cut down and tossed to one side before its time, and not in a respectful way either, but in a way that still sticks into many Trek fans today – around the globe – like a rusty splinter.

Here’s the big nasty splinter – our very final episode isn’t in truth an episode at all!  What we got was a Holodeck Simulation with Troi and Riker lording it around the NX-01.  Riker mostly takes on the role of the Chef – Troi’s idea – as most crew converse with the chef (supposedly); it’s here he interacts with numerous crew members, even at one point freezing the program to get a steal a sneaky kiss from T’Pol.

The main Enterprise tale revolves around the Andorian Shran (who isn’t dead) requiring the help from Archer to save his daughter, then we see the beginnings of the Federation, oh and *spoilers* Trip dies *spoilers*.  However, this sub(standard) story is all background noise to Riker and Troi prancing around in the very final episode.

Then to cap it all off, they don’t even let Captain Archer (Scott Bakula) have the closing speech – even that’s shared between himself, Picard and Kirk.

A total disservice to anyone that had watched this show from beginning to end.  Clearly the producers at some point said, “You know what would be cool!?  Not giving the fans a real final episode, but just laughing really loud at them instead.”

Another to miss – A Night in Sickbay.  A Beagle gets ill and we spend the show trapped in Sickbay with it.

So that’s the list of episodes to steer well clear of, for truly they are a bunch of total Star Trek stinkers and should never be watched. Even if you think, ‘They can be that bad surely!?’ – don’t ever watch them!  You have been warned.

A couple of sites to say thanks to include the Star Trek FB Page for bouncing episode titles at me, also for firing DS9 nasties at me too.  Thanks also to one of the best Star Trek Resource Sites around, Memory Alpha for helping me find dates and other such things I’d forgotten along the way.

What did you think of the above list?  Do you remember any episodes from the decades of Trek that you think we should have had up there, or do you think that the ones we’ve added are completely wrong?  Let us know below…