As many people expected, the so called leak of Games with Gold for October 2017 was not in the slightest bit true.  No Devil May Cry: Definitive Edition and no Middle-earth: Shadow of Mordor but don’t despair as there are still a good variety of quality games to enjoy. 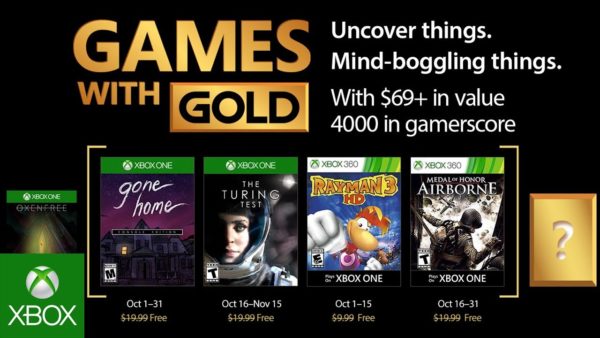 For the whole of October Xbox One players will be able to follow the tale of 21-year-old Katie Greenbriar in The Fullbright Company first person, adventure exploration game, Gone Home.  From 16th October until 15th November we are treated to first person puzzler, The Turing Test.  In this interesting puzzler players take control of Ava Turing, an engineer for the International Space Agency (ISA), and follow her story of introspection and morality whilst discovering Europa’s hidden mysteries.

For the first half of October Xbox 360 gamers will be able to enjoy Ubisoft’s humorous platform title Rayman 3 HD.  This third title in the series saw Rayman take on Andre the black lum and prevent him from taking over the world.  The final game for 360 owners is Medal of Honor: Airborne and will see players jump from a C-47 and explore an open world to find the best position for that tactical edge over the Nazi forces.