A young Thurgood Marshall battles through one of his career-defining cases. 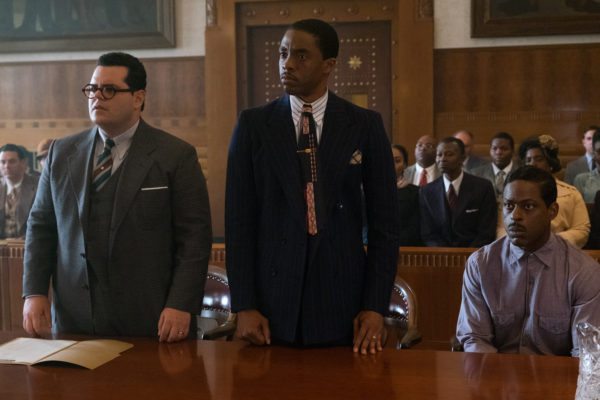 Chadwick Boseman may be most known to the mainstream eye for portraying superhero Black Panther in the current crop of Marvel Cinematic Universe blockbusters, but when not suited up for battle he often finds himself playing real-life historical figures (his performance as Jackie Robinson in 42 is criminally overlooked) that have influenced humankind and the world for the better. And his greatest crusade won’t be collaborating with Earth’s Mightiest Heroes to save the universe, instead, it will be biopics like Marshall that simultaneously showcase his serious acting chops while instilling hope for social justice and equality into both the cinematically reenacted darker times and people around us.

Also, if Thurgood Marshall is a real-life superhero, and he is, Marshall the film is his origin story, as director Reginald Hudlin (Boomerang, Serving Sara) has chosen to not tell the arc of the groundbreaking Brown vs. Board of Education Supreme Court case deeming segregated schools unconstitutional, in favor of focusing on a younger Thurgood Marshall taking up a dispute defending a black chauffer named Joseph Spell (Sterling K. Brown) facing allegations of raping his white socialite employer Eleanor Strubing (Kate Hudson). It’s certainly a lesser-known piece of history, yet in some ways equally as game-changing. The probability of World War II is also looming, along with funds for the NAACP (National Association for the Advancement of Colored People) nearly dried up, placing heavy civil rights pressure on the righteously determined African American lawyer. 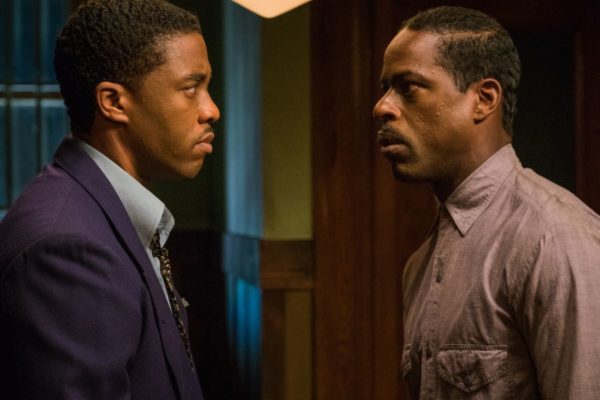 Wisely, the narrative doesn’t take place too early in the pioneering advocate’s prestigious career, as there is a brief conversation discussing some of his spectacular accomplishments; Marshall is essentially a fighter unwilling to back down from his cause, arguing case after case at the expense of constantly traveling away from his wife with whom he is trying to conceive a child. It allows Boseman to really sink his teeth into a singular point in time of the man’s life, sidestepping the most common pitfall of biopics. Furthermore, due to segregational laws in Connecticut where this particular trial is being held, he is unable to speak in the courtroom, relying victory on an unlikely Jewish insurance claim partner he coerces into the battle (Josh Gad as Samuel Friedman) to do the talking for him. Early on in the movie, Marshall refers to books on the law as his guns, which is definitely true, and in this debate, he makes Samuel’s voice the trigger.

Initially unenthused about teaming up for the greater good (Samuel is concerned about what taking part in defending a black man accused of rape could do to his reputation), the two face oppression in their own ways. The horror hasn’t fully yet arrived over in Germany, but deep down Sam appears aware of the inevitable hell and relates to Marshall’s never-ending fight. They come together and assist each other with gradually growing optimism alongside their unification, always a joy to watch thanks to stellar chemistry between the two terrific actors. Naturally, Boseman is the straight-faced, confident one while Gad provides some greatly implemented comedic relief. However, Gad is also emotionally involving in here too, which may surprise some viewers.

Marshall plays out both as detective work procedure (complete with a catchy jazzy noir score by Marcus Miller further placing us in the time period, and some conventionally touching pieces for specific scenes) and courtroom drama, where both aspects focus on great acting and compelling mystery to keep audiences engaged. When the truth does come out, the motives behind both sides of the trial take on a symbiotic meaning, giving the film extra thematic heft that unfortunately is relevant today. Supporting roles from Sterling K. Brown as the accused, Kate Hudson as the accuser, James Cromwell as the backward minded judge, Dan Stevens as the prejudiced prosecutor, and even numerous bit parts make for an impressive ensemble elevating the tension. Thurgood Marshall’s silence in the courtroom is certainly felt just as much as his stern one-on-one’s with Joseph Spell trying to decide what to believe.

The acting is so accomplished with characters so fully realized that it’s actually frustrating whenever Reginald Hudlin decides to utilize flashback sequences playing over courtroom testimonies. These sequences tend to come across as a made for television movie or an episode of CSI, when the direction should be trusting the delivery of each and every line to generate investment. It’s the only glaring flaw in the movie outside of how superfluous some of the small moments spent with Marshall’s family and friends are. 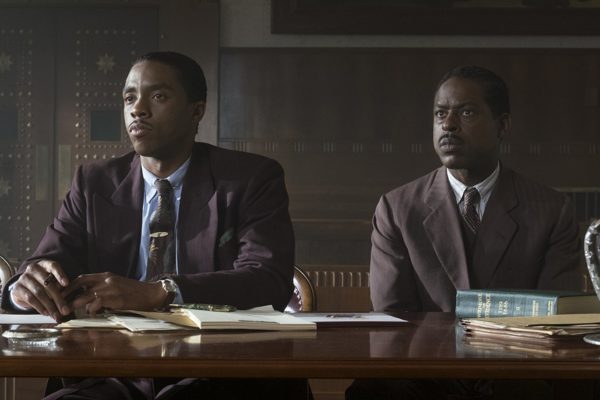 Anyway, as Marshall is in the process of wrapping itself up, the dignified lawyer takes a small cup of water from a fountain labeled “whites only”, showing that one major milestone does not mean victory has been achieved. Juxtaposing that with the current times we live in, it still feels that there is more we need to do. If superheroes exist to inspire citizens of the world to do good, then another feature exploring Thurgood Marshall couldn’t hurt; there is much more history to put on-screen. It’s definitely odd to say for a biopic, but a sequel would be welcome.