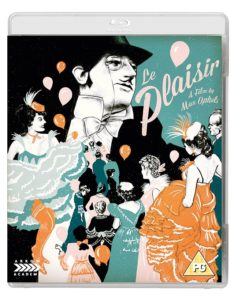 The three part film begins with Le Masque, a look at an ageing dandy’s attempts to stay young and desirable through dance and socialising. Ophüls captures a dream-like fantastic world of nightlife here, with the camera responding back and forth to the most expressive and extravagant dance moves. The dance of the man, who goes each night to the club wearing a mask to hide his aged visage, is modern in style and could easily fit in to a venue of today. Behind the blurred lights and disorientating music hides a bitter-sweet pleasure; the dancer cannot slow the ageing process, any more than his resigned wife can halt her husband’s quest for never-ending pleasure. A haunting and effecting story that opens up the film in memorable style.

The next segment serves as the film’s longest and most complex. La Maison Tellier follows a day out to the country for the workers at a local brothel after Mme Tellier decides she wishes to attend her niece’s first communion. From that premise itself, we can see various themes of innocence, religion, sexual awareness and, pleasure, all appearing into view. The women are away from the town possibly for the first time ever and see with fresh eyes the workings of country life. The scenes highlighting both the differences and similarities between the niece and the women are profoundly drawn. While the bordello is closed for the day, the Normandy town is thrown into disarray, with local menfolk disturbed by the turn of events. They soon fall into arguments and fights to quell some of their boredom. When the women return, the previous order is resumed, but perhaps with some greater insight.

The last part of the film Le Modèle is the film’s briefest and saddest. An artist becomes captivated by a model (Simone Simon) and the two fall in love passionately and quickly. After they build a life together things begin to dismantle just as quickly, and the artist grows distant and non-communicative. He eventually moves away into a house-share with another artist and the model feels compelled to prove her love. This ends disastrously and she ends up disabled and in constant need of attention. This ‘succeeds’ in keeping the artist at her side as he is now a constant companion/carer.

Le Plaisir is a wonderfully thoughtful film, reworking some of de Maupassant’s primary concerns to fit into a 1950’s cinematic audience. In any case, human wants and desires and quest for pleasure does not essentially change. This film provides a look at the timelessness of the human heart.