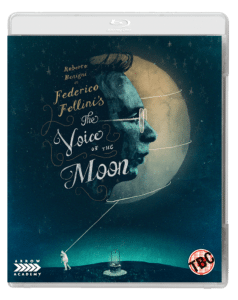 A recently released patient from a mental hospital has a series of fantastic adventures amidst a surreal landscape while trying to win the affections of his love.

Federico Fellini’s last film is a jaw-dropping experience.  Bringing together a surreal template of dream logic with wry humour and sardonic swipes at society, The Voice of  the Moon – or in Italian, La Voce Della Luna – provides the magical realism and wonder of life that the Italian filmmaker is best known for.

Adapted from Ermanno Cavazzoni’s  poetic novel, the story follows the recently released mental patient Ivo Salvini (Roberto Benigni, Life is Beautiful) as he navigates his way around a strange and compelling landscape. He encounters the entrancing Aldina (Nadia Ottaviani) by accident and falls in love immediately. As he attempts to win her heart, he finds himself in all sorts of weird, fantastic and phantasmagorical situations, surrounded by various peculiar characters all motivated by unknowable forces. These include Gonnella (Paolo Villaggio), an old man given to wildly paranoid conspiracy theories and also a group of demented brothers determined to capture the moon. This, plus a stirring nightclub dance-off to Michael Jackson’s ‘The Way You Make Me Feel’, highlight the bizarre offerings in place from this incredible tour-de-force. Salvini asks no questions of this alternately nightmarish and inspiring backdrop, simply going about life searching for love and contentment while sharing an infectious enthusiasm for the world’s – and the moon’s – oddities.

Initially emerging in 1990 without the attention it deserves, Fellini’s swansong appeared at Cannes out of competition and did not receive any distribution deals in North America or the UK. An influence on filmmakers such as Terry Gilliam (The Fisher King, 12 Monkeys) The Voice of the Moon is further evidence of Fellini’s prowess at experimental styles and techniques that help to create an enchanting and beguiling atmosphere. The director’s earlier works including La Strada, La Dolce Vita and 8½ cemented his place as one of Europe’s most pioneering cinematic artists – this release provides a fresh impetus to reaffirm that status and to celebrate a triumphant career finale.