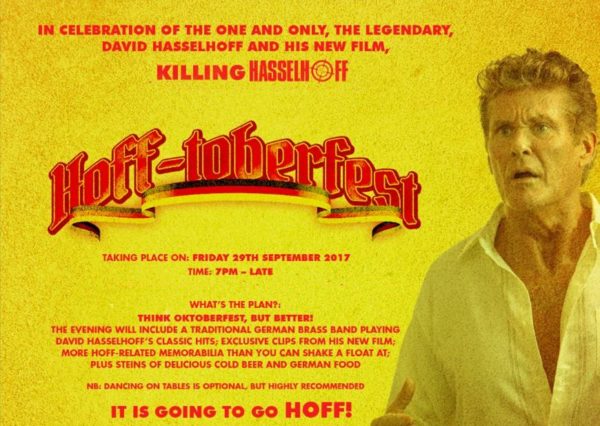 At this point, David Hasslehoff is more caricature than person. He is Knight Rider, he is Baywatch, and he is the man that –somehow – brought down the Berlin Wall. So it’s of some surprise that, in 2017, he’s having a certain resurgence, appearing in Baywatch and Guardians of the Galaxy 2.

His moment is to be elongated with the release of Killing Hasslehoff, with the Hoff playing the Hoff once more, whose life is threatened by bumbling bar owner Ken Jeong who hopes to off the Hoff to appease loan sharks.

It’s a film clearly built on a single joke and somehow, director Darren Grant has roped in a cast chocked full of those genuinely funny, including Jim Jeffries, Rhys Darby, Ken Jeong and Jon Lovitz. But really, it all means little, as Hasslehoff exists as a joke, and it’s a joke that has maintained for well over thirty years, so we may as well ride the wave because he’s not going anywhere.

With that, I had the pleasure of attending “Hoff-toberfest,” the launch party-come-celebration of Killing Hasslehoff. I had not seen the film, and I have not seen the film, but an invite to the Bavarian Beerhouse off Old Street with the promise of steins of lager and a German band playing oompah versions of the Hoff’s greatest hits was too good to refuse. So I did. There were Hasslehoff masks, Hasslehoff merchandise, a projector playing the Killing Hasslehoff trailer on a loop and of course, a band playing Hoff’s hits (who knew he had so many). But there was mainly beer. A stein feels more novelty than useful, it’s tough to pick up and unless surrounded by others, you look a fool with beer dripping down your chin.

Thankfully people soon arrived and beer flowed, as did food, but mainly beer. The stag do next to me joined in, I saw a man drink a yard of beer, there was debauchery and all in the name of Hasslehoff.

In a daze of lager and sausage, I gazed across the hall, as men and women chugged steins wearing masks of the Hoff and for a moment, I wondered if I had stumbled through a parallel door to the one John Cusack fell through in Being John Malkovich, only it was Hasslehoff. I was Being David Hasslehoff.