Firaxis and 2K hadn’t given us anything to get our teeth into for Civilization VI for ages and now they treat us to another race so soon after the Khmer.  The latest race to grace our worlds is Indonesia led by warrior-queen regent Dyah Gitarja.  Dyah Gitarja rules the Kingdom of Majapahit (what is now Indonesia) and during her rule expanded her Kingdom and quelled the rebellions that were taking place.  Meet Dyah Gitarja in the First Look trailer below… 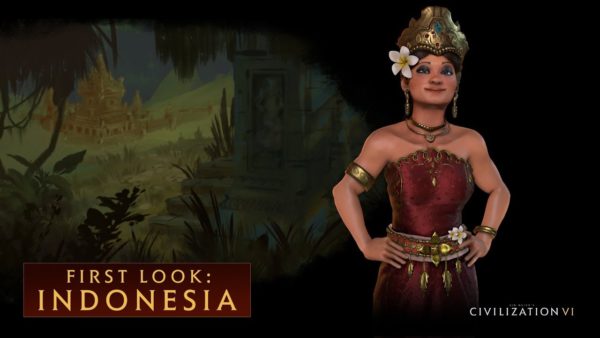 Dyah Gitarja’s unique ability is ‘Exalted Goddess of the Three Worlds’.  This ability grants bonus Faith to coastal cities and allows the purchase of naval units with Faith at a discount.  It also eliminates the movement cost for religious units to embark or disembark from ships.

‘Great Nusantara’ is Indonesia’s unique ability and allows coastal tiles to provide adjacency bonuses for Holy Sites, Campuses, Industrial Zones and Theatre Squares. Entertainment complexes will also give an extra amenity if they are adjacent to a non-lake Coastal Tile.

The Jong is Indonesia’s unique unit and is much faster than the frigate that it replaces.  The Jong will gain extra combat power if in a formation and all units in the formation will gain the Jong’s movement speed.

Indonesia’s unique improvement is the Kampung which should be built on coastal tiles adjacent to a water resource.  The Kampung will provide housing, production and food for each adjacent fishing boat.  This structure can be improved later in the game through research.

Indonesia’s strong naval advantages make this a civilisation with lots of potential.