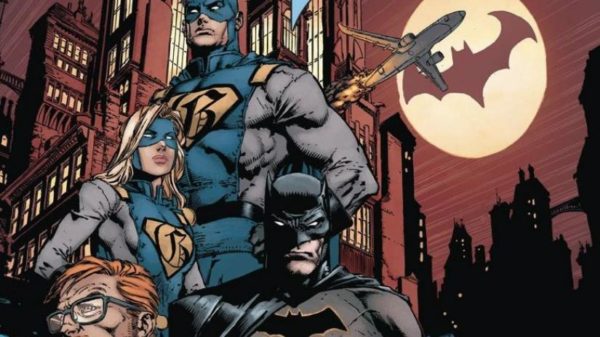 Since the start of DC Rebirth, writer Tom King has been at the helm of Batman, crafting some entertaining and insightful stories into the Dark Knight. In keeping with their Rebirth deluxe editions, DC has released Batman: The Rebirth Deluxe Edition Book One, combining the first two volume’s of King’s run into one book and even throwing some of the crossover Night of the Monster Men into it. What fans get is a very good, if somewhat uneven, Batman story that dives into the character’s psychology.

Collecting a total of 16 issues, this is a nice, hefty book. The main draw is the first story arc, ‘I Am Gotham’, where Batman begins training two new, young superpowered heroes to protect Gotham City. King uses this arc to really examine Batman’s mortality after a very close self-sacrifice in the first chapter and what he’ll leave behind when he’s gone. There’s a lot of emphasis placed on moving past one’s fear as well, whether it is how Batman overcame his or teaching Hank and Claire to overcome theirs.

Hank and Claire, aka Gotham and Gotham Girl, are pretty interesting additions to Batman’s team. Their optimism and lightness makes a good contrast with Batman’s darkness, but also shows that behind all the apparent cynicism Batman is a hopeful character as well. However, its all for naught as the two heroes are used by Hugo Strange in his latest plot, challenging their hope by examining how Gotham City transforms people for the worse most of the time. Hank’s turn to villainy may be a little quick, though, but is still fairly effective.

The second arc, ‘I Am Suicide’, may not be quite as strong as ‘I Am Gotham’, but is still a fun read that features Batman forming his own version of the Suicide Squad and planning a Mission: Impossible-like break-in to Bane’s prison in order to save Gotham Girl. Featured in the story are Catwoman, The Ventriloquist, Bronze Tiger and two new characters Jewlee and Punchee. There’s not much time between the team members for us to get a sense of the dynamic between them, though King writes a good take on the Batman/Catwoman relationship, continuing his examination of their on/off romance in the great ‘Rooftops’ issues that closes out the book.

‘I Am Suicide’ also has an interesting change in this printing. When it came out as a single issue, Batman #10 featured Batman repeating a threat to Bane over and over again, giving him an Inigo Montoya moment. In this book, however, much of the repeated threats are removed. This change actually makes the chapter better as its much less wordy on each page. There’s much more space now, giving readers a better look at Mikel Janin’s art.

‘I Am Suicide’ is a little uneven due to the lack of a true team dynamic, but where this book’s real unevenness comes from is actually the inclusion of the Night of the Monster Men issues. It was a crossover between Batman and Detective Comics, yet this book only contains the Batman-centric issues of the crossover, meaning we only get parts one and four of that story. Though the story follows up on Strange’s plot against Gotham, its interrupted and then not even concluded in this book, instead telling readers to check out the full story in the book’s own trade. This hampers the flow of the story especially since Monster Men is the bridge between ‘I Am Gotham and ‘I Am Suicide’.

The artwork throughout the book is good. David Finch does a great job on ‘I Am Gotham’, capturing the moody atmosphere of the city and Batman’s imposing presence very well. Mikel Janin takes over for ‘I Am Suicide’, and though his artwork contrasts Finch’s darkness with a lot of light and a more cartoony look, it still works. His character movements especially stand out, giving Batman some fluid movements in some nice page spreads.

Mitch Gerads also illustrates the ‘Rooftops’ story and shows the intimacy between Batman and Catwoman very well even when they’re just standing in their costumes speaking to one another. The only detracting thing about the art is Riley Rossmo’s Monster Men chapters as his style is much rougher than the other three artists.

Despite the ill-placed Night of the Monster Men issues, Batman: The Rebirth Deluxe Edition Book 1 is a pretty solid collection of Batman stories. King has a very good handle on the character, examining what he means to the city, people and the hero’s psyche in some interesting ways. His supporting characters play nice roles, though they’re put to better use in the first half rather than the latter half. Fans, however, will not be disappointed picking this book up.