The shocking conclusion of “Whom God Destroys”! Kirk and Eurydice remain trapped on the planet Antos IV, while Garth of Izar makes his move to assume command of the Endeavour in orbit above them! 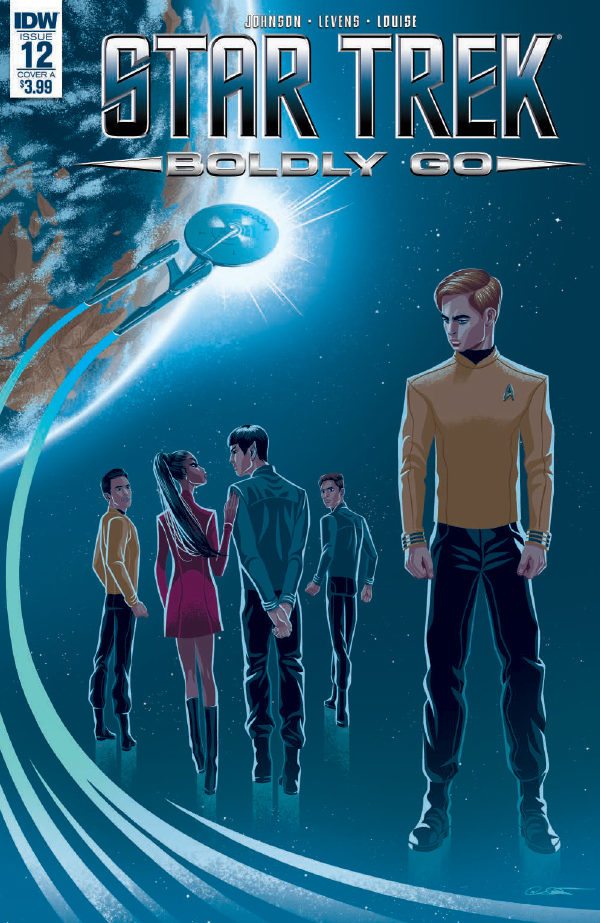 Star Trek Boldly Go #12 from Mike Johnson and art from Megan Levans wastes no time in continuing last week’s story [Star Trek Boldly Go #11 Review], in which we left Kirk rather rudely deposited on Antos IV with Eurydice. Meanwhile the presumed dead Captain Garth, who now has shapeshifting abilities, has assumed command of the USS Endeavour using the appearance of the aforementioned Captain James T. Kirk.

With Kirk having to explain his reason for now also being an unwilling captive with Eurydice, she reveals to him that Captain Garth, who Kirk – along the rest of Starfleet – believes to be very much dead, was the one who tricked her and is now in control of his ship. Their incarceration doesn’t last long however, because of the practical thinking of Thalia, Eurydice’s daughter.

Aboard the Endeavour, the crew are already becoming somewhat unsure of Garth/Kirk’s actions aboard the ship. With simple mistakes being made and idle comments being slipped up on, his Bridge Crew are more than a little wary of both him and the secretive mission to the USS Heisenberg, Captain Garth’s old ship. Their mistrust is proven correct when they approach said ship and all of Endeavour’s controls are directed to the Captain’s Ready Room; this room is then isolated from the rest of the crew.

Meanwhile Eurydice, Thalia and the actual Captain Kirk and making a direct line towards the USS Endeavour to restore order before it’s to late.

So wraps up this rather rapid two parter from Mike Johnson. Though – I’ll be brutally honest – I wasn’t totally enamoured with this story, after its conclusion something has pricked my interest. I’m hoping that, found in these pages aren’t just the ramblings of a jaded mad Captain. That there is actually somebody on board the USS Heisenberg that prefers the I.S.S. method of claiming the Captains chair, because this will be extremely interesting for a future tale indeed.

Megan Levan’s art is great to look at, and the style delivered is needed in the Trek series, though as stated in my last review I find it difficult to recognise Kirk in her some of her panels. I could really see Megan Levan’s style working well on the Starfleet Academy series, if that ever returns. Once again, praise needs to be delivered on three covers here and it’s going to be an expensive trip for some people, as George Caltsoudas, Tony Shasteen and Cryssy Cheung deliver three fantastic alternative covers to collect.

This may not have been the strongest story in the Boldly Go series, but if Mike Johnson has really snuck on board the USS Heisenberg a rather malevolent Starfleet Officer, we could see an interesting story appear in the near future.