Total War: Warhammer II is a challenging game and getting used to the new races and the associated strengths and weaknesses can be both rewarding and frustrtaing.  However, thanks to the latest video in the ‘How to win series’ from Creative Assembly we can gain lots of hints and tips on how to win using the evil race of the Druchii, the Dark Elves.  Watch this new video below… 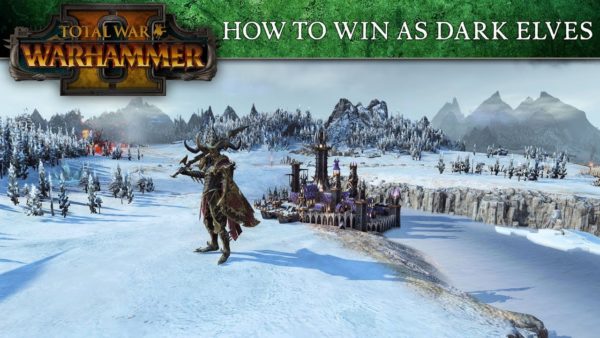 The Dark Elves are the most sinister army in the game, unlike the other 3 races which either kill for food or necessity these tainted cousins of the High Elves kill merely for the pleasure.  They torture for sport and take survivors from their raids and battles to use as slaves in their dark empire.

As with the other races, Dark Elves can win the game either through domination or by completing all the rituals for the Vortex.  Rituals will need to be started by collecting scrolls but keep an eye open for the other races doing the same and be sure to use an intervention should they beat you to it.

Dark Elf players will have the ability to cast Rites using slaves, possibly the most effective of these is the Sacrifice Slaves to Mathlann Rite which allows a player to recruit a Black Ark vessel.  These are exceptionally useful units as they can bombard enemy positions during battles and reinforce players army to compensate for units lost in battle.

Loyalty is a very important aspect of the Dark Elves, allow a Lords loyalty to reach zero and they will take control of the army and try and overthrow you.  Loyalty can be maintained through winning battles and allocating equipment.

Despite being the darkest army in the game they are certainly an interesting one to command so watch the video and find out more about how to take this race to victory.