7 Days to Die fans be prepared to have your mind well and truly blown by some amazing Alpha 17 concept art revealed by Joel Huenink (AKA Madmole) of The Fun Pimps.  If these features manage to get completed then Alpha 17 is going to be as equally epic as Alpha 16. 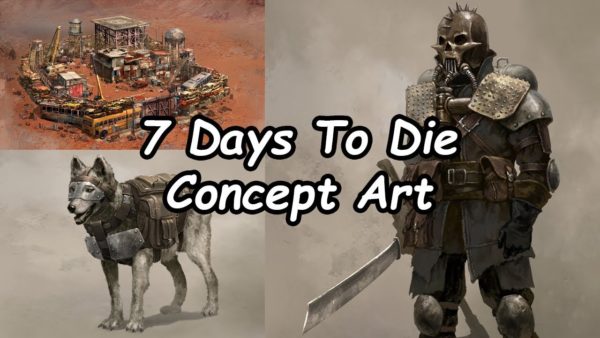 For the most part this concept art focuses on NPCs of different factions, both friendly and not so friendly, in fact when I say not so friendly I mean likely to kill you rather than look at you.  Starting with these ‘baddies’ first we are treated to a glimpse of a member of Duke’s Initiates (remember Duke’s Casino Tokens), well armoured and more than likely well armed these chaps may put a dampener on your day, however, compared to the Duke’s Elite Guard they are probably pussy cats.  The Elite Guard look like they were made for the apocalypse, just the look of them more than likely scares the zombies.

The NPCs of the White River Settlement are the more friendly folk and in the video we are introduced to Carson Maxwell, a runner who will travel from outpost to outpost and a female runner both of whom will be encountered on roads and possibly in traders and a Ranger who is kitted out for the more stealthy approach.

Traders have also got new concept art so that Traders Hugh, Joel, Rekt and Bob all have their own unique look.  There are also plans for each of them to specialise in certain items.  There is also artwork shown for Trader Bob’s new base which will incorporate buses and crashed cars into the walls and possibly a UV in the grounds.

Finally, we are treated to the artwork for something most of us have wanted since wolves were introduced, a tame and armoured wolf which looks absolutely adorable.  A tame wolf will be your companion on those lonely nights when the zombies are sniffing around outside.

All this concept art plus the new motorbike images revealed lately are really building up the excitement for Alpha 17.  Let us know in the comments if you feel the excitement rising.