Microsoft have revealed November’s lineup of free games for Gold subscribers and a mixed bag of genres it is too, with some action, adventure and racing titles to be enjoyed.  As usual the games offer a healthy amount of points to boost your gamerscore. 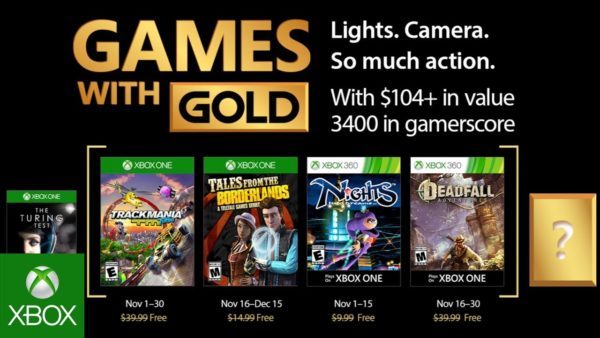 On the Xbox One players will be able to look forward to Ubisoft’s Trackmania Turbo.  Developed by Nadeo, Trackmania Turbo is an arcade racer with an insane amount of tracks to race on and also comes with a Trackbuilder sso that you can build even more.  This title will be available for the whole of November.  From 16th November til 15th December there is the hugely popular episodic adventure, Tales from the Borderlands from Telltale Games.  Players will have access to all five episodes which promise to provide plenty of entertainment.

For Xbox 360 gamersthere is the HD remake of Nights into Dreams from the 1st to 15th November.  This title was initially developed for the Sega Saturn back in 1996 and follows the story of two teenagers, Claris and Elliot, who enter a dream world called Nightopia.  Finishing off the month will be the first-person action adventure title,  Deadfall Adventures.  As adventurer James Lee Quatermain players will go on a journey to Egypt on the search for a rare treasure, on the travels players will need to kill Nazis, Russians and supernatural creatures to reach their goal.

Remember, both Xbox 360 titles will also be available on the Xbox One thanks to backwards compatibility.

Leave a comment and let us know what you think of November’s lineup.