Mark Felt: The Man Who Brought Down the White House, 2017. 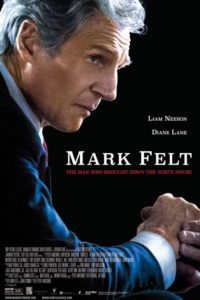 The story of Mark Felt, who under the name “Deep Throat” helped journalists Bob Woodward and Carl Bernstein uncover the Watergate scandal in 1974.

At one point during Mark Felt: The Man Who Brought Down the White House the titular famed whistleblower states that “no force is stronger than FBI, not even the FBI”, which offers insight to just how big the Watergate scandal investigation was not just for citizens of the United States, but the country’s authority. For the first time in the history of the organization, they were being blacklisted from interviewing various aspects and further exploring deeper intricacies of all the recent shady ongoings. Essentially, it was truly time for someone to blow everything wide-open, effectively eradicating all of the dirty secrets from the Nixon administration.

The obvious comparison to draw here is not of the never-ending circus that is the Trump regime, which definitely gives the film some added purpose and relevancy instead of coming across as a reverse telling of All the Presidents Men. In reality, that depiction of the story will never be topped, but new perspectives painted by a modern-day brush justify a new version’s existence. The current political climate contains everything from accusations on false news to wiretapping conspiracies to rigged elections, leaving one wondering if the chaos unfolding in the house of cards will yield another Mark Felt/Deepthroat.

Even taking the film at surface value, there is quite a bit worthy of praise, most notably the performance from a gray-haired, noble, stuck between a rock and a hard place performance from Liam Neeson. His voice contains a booming sense of command and dignity, and as the investigation grows increasingly complex we begin to further empathize with his inner conflict. Mark Felt: The Man Who Brought Down the White House actually boasts a cast of well-known names (supporting characters are played by actors Diane Lane, Michael C. Hall, Tom Sizemore, Martin Csokas, Maika Monroe, and more) but it’s undoubtedly Neeson that is actually given the most material to work with, and he certainly leaves a lasting impression. On a wildly unrelated but personal note, hey Jordan Vogt-Roberts, if by some chance you ever read this, Liam Neeson in this movie is the spitting image of Old Snake in Metal Gear Solid 4: Guns of the Patriots.

Anyway, Mark Felt: The Man Who Brought Down the White House is largely just about that; bringing down a corrupt establishment. However, there are also windows into the personal life of Mark Felt that are undercooked and better left off in a film that is exclusively interested in portraying his life outside the FBI. Granted, that wouldn’t necessarily be much, but subplots involving an alcoholic wife and a runaway radical daughter are afterthoughts with little reason to care. They also have crucial scenes related to them smashed in between the ending of the movie, coming across highly disjointed.

Some of the direction by Peter Landesman (2015’s NFL head injury drama biopic Concussion) is also poor and amateurish, as frequently characters have conversations in darkly lit rooms where certain figures use overstated voice tones dictating whether they are good or bad. There are also numerous moments where Mark stares out windows while deep in thought that feels like something one would see in a television movie on the subject. Of course, pivotable information to the investigation is also found during lame scenes of Mark looking over different files. The script itself, also by Peter Landesman and based on the book of the same name, is serviceable, but his approach to the execution does not bring out nearly as much emotion as the film should.

Still, the central performance by Liam Neeson along with the story itself and its parallels to the current political climate makes Mark Felt: The Man Who Brought Down the White House an easy recommendation. It’s absolutely flawed and misses out on its full potential, but functions thanks to at least finding focus when doling out the facts and showing what went on throughout the investigation. There are worse things than playing something safe.