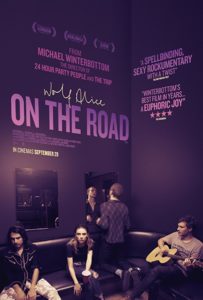 London rock band Wolf Alice tour the UK and two members of their crew find love along the way. 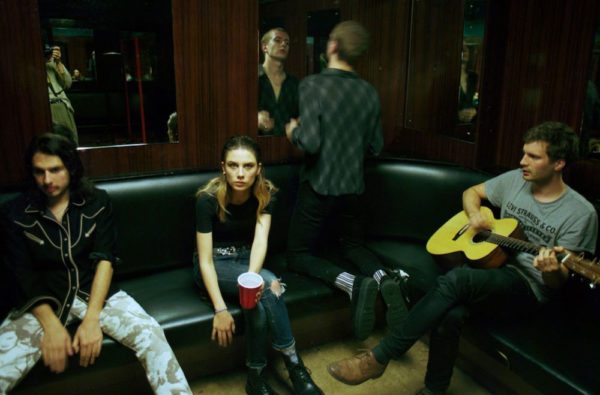 Few directors are anywhere near as prolific as Michael Winterbottom. But naturally, as with any filmmaker who averages at least a film a year (and sometimes even more), the output doesn’t always match the talent behind the camera. Thankfully though for the band in question here, the fast-rising Wolf Alice, On the Road is one of Winterbottom’s more solid recent efforts, blending fact, fiction and a whole back-catalogue of the finest new alt. rock tunes around to make for what is a certainly unique, if stilted tour film.

The word ‘doc’ is used somewhat tentatively here though, because as much as On the Road very much takes place in the real world, not all of its components are entirely natural. The band themselves take the reins for the most part, mumbling their way through backstage sound-checks and tour-bus chats that go precisely nowhere (all part of being road-bound nearly 24/7). But never being the kind to deliver another same-old tour documentary, Winterbottom throws a spanner in the works, layering an extra fictional narrative over the top. And as the tour presses on, he finds himself cutting away more and more to the very clearly scripted lives of these two random crew-members, never quite losing sight of the band, but definitely diluting their involvement quite considerably.

To be fair to Winterbottom, without the extra fire and humour of the fictional pair, On the Road would just be another run-of-the-mill band profile, and a quiet one at that. Whilst Wolf Alice certainly own the film musically, their behind-the-scenes presence is fairly dead. The few decent moments the film manages to capture feel stolen at most, and what comes across most prevalently isn’t the energy or wisdom of touring musicians, but instead the inescapable mundanity of it all. The fictional romance does add some much-needed passion, it just seems so separated from Wolf Alice themselves, that it forever feels like the two strands are locked in a constant tug-of-war, and neither seems willing to give in.

There are glimmers of greatness now and then; even if it is just a character looking for a towel at a venue with showers. It’s very human acts, in very human spaces, that help make things that much more real, and when Winterbottom settles on these much more muted little musings from the road-tripping life, we start to get a feel for what the film really is underneath. Not an expose on Wolf Alice, or the rising music scene, but a much more somber take on touring life in general. How it feels to forever live your life on the move, with no space, no energy and little concept of time.

It’s far from perfect, and much like a lot of the Brit director’s other work, it’s scrappy as all hell, but in its quieter moments, On the Road is powerful, thoughtful and occasionally even borderline transcendent. But sadly for the most part, it just feels weighed down, by contradictory needs to show some sort of human story, and the story of the (fairly closed off) band themselves. There’s too much going on to paint a proper portrait, and ultimately, unless you’re a particularly die-hard fan of either Winterbottom or Wolf Alice, there’s really little reason to recommend this one at all.