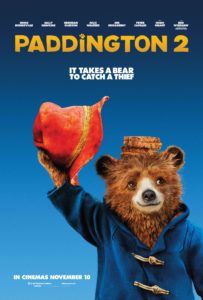 Now happily living with the Brown family in London, Paddington realises his beloved Aunt Lucy’s 100th birthday is approaching and goes looking for the perfect present. When he finds it, it’s way too expensive, so he starts working to pay for it.  While he’s doing that, somebody else has their eye on it and will stop at nothing to get it.

Three years ago, the arrival of Michael Bond’s much-loved Paddington on the big screen caused more than a little nervousness. A genuine family favourite, nobody wanted to see him suffer in translation and, thanks to the safe hands of director Paul King, he didn’t. With the voice of Ben Whishaw and the blessing of author Michael Bond, the film went down well with film goers and critics alike – so well that the sequel, Paddington 2, has arrived.

This time round, the director’s still the same, as is the producer, David Heyman. Michael Bond was involved before his death, and the bear from darkest Peru still has the same voice. So far, so comfortingly familiar. But this is a sequel, after all, with all the inevitable question marks that go with it. Oh, ye of little faith! King, his writers and cast have pulled off a follow-up that’s at least as good as the original, if not occasionally better. 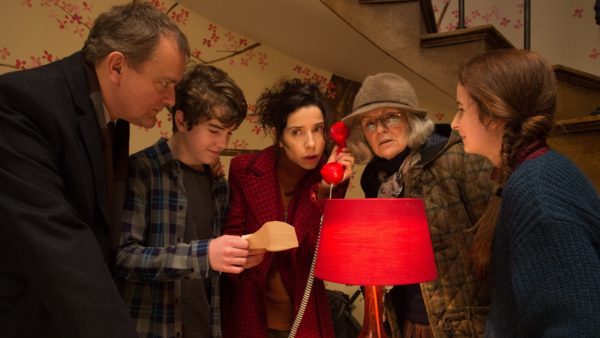 Michael Bond will be smiling approvingly at the latest outing for his most famous creation, as it’s completely faithful to his spirit and style. Paddington is still the innocent abroad, good natured, polite, well-meaning, but frequently accident prone – just like he always was. Nor does he let an opportunity for a good deed pass him by. Like providing breakfast, in the form of a daily marmalade sandwich, for his neighbour as she cycles to work. Or reminding another neighbour, played by Sanjeev Bhaskar, as he leaves for work that he’s forgotten his door keys – again. Always just in time for him to stop himself being locked out. It’s feel good stuff without being overly sentimental, and Paddington is so modest that, when he’s reminded of these small acts of kindness, he looks embarrassed.

This time round, King has taken inspiration from some other movies. He leans on them lightly, not copying them word for word but simply smiling in their direction. The prison where Paddington is locked up could easily be re-named The Grand Portobello Prison as a tribute to its Wes Anderson style model showing all the prisoners in their cells and the inmates sporting a grey and pink striped uniform – thanks to Paddington’s encounter in the laundry with a bright red sock. And the climax, with its two trains, is like a full size version of the chase in Wallace and Gromit’s The Wrong Trousers, but without the nifty track laying. The film has its own ideas, of course, but the references are crystal clear and it’s just something else to relish, especially for the adults in the audience. 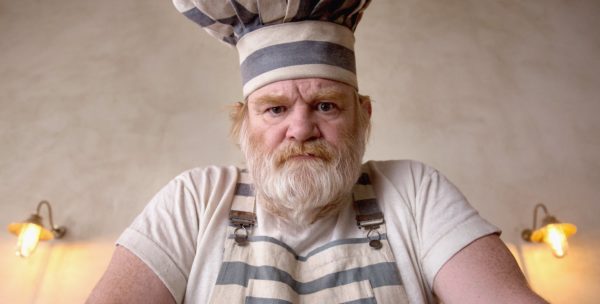 Whishaw’s voice is still perfect for Paddington, while new characters this time round include a pompous judge (Tom Conti), prison cook Nuckles (that’s how he spells it and he’s played by Brendan Gleeson) and, best of all, Hugh Grant as the villainous has-been actor Phoenix Buchanan. He’s a gem, sending himself up something rotten and endearing himself hugely to the audience in the process. There’s a cluster of delicious cameos as well: Richard Ayoade as an expert witness at Paddington’s trial, Simon Farnaby as a nun-fancying security guard and Tom Davis (remember D J Dan in Prevenge?) as a deeply unfriendly prisoner who reveals a talent for making raspberry panacotta.

Paddington 2 is, quite simply, the feel good family film of the year, one that genuinely appeals to all members of the family, regardless of age. It’s loveable, fuzzy, warm and will be a sure fire winner at the box office. Paddington 3 is already on the way. It’ll have to go some to beat this.