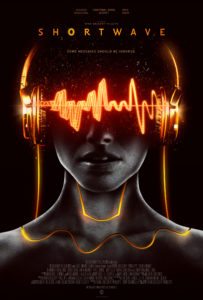 Isabel and Josh, a young couple dealing with the recent loss of their child, move to a remote home that Josh’s work has can study mysterious radio signals. As Josh hones in on the origin of the signals, Isabel begins to exhibit strange behavior, which leads to the pair confronting their painful past as well as their bizarre present circumstances.

Though it is a smaller, more intimate film, writer-director Ryan Gregory Phillips’s Shortwave will evoke inevitable comparisons to this year’s It Comes at Night. The two films both feature small groups of characters in isolated forest settings being terrorized both by mysterious forces and each other. And both share a fondness for dream sequences and ominous red lighting. But where It Comes at Night was frustrating in its evasiveness and its refusal to embrace most of the tenets of its genre, Shortwave is mysterious yet forthright about its science fiction and horror DNA.

The plot is set into motion when Josh and his wife Isabel (Cristobal Tapia Montt and Juanita Ringeling) are sent by his employer to live in a remote home, where he can continue to study the origins of mysterious radio signals. Their relationship is under extreme pressure for a multitude of reasons, most significantly their disappearance of their child. As Josh gets closer to discovering the origins of the radio signals, Isabel begins to act very strangely. 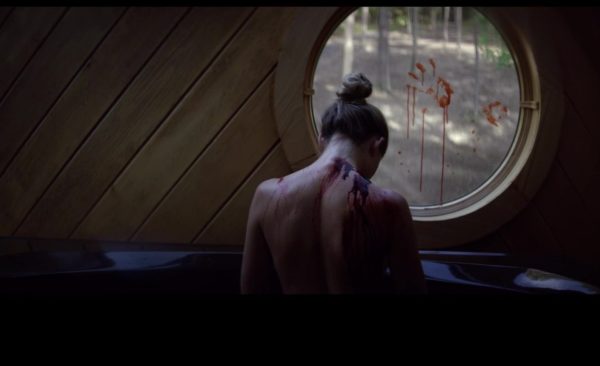 There is no doubt that Shortwave is a low-budget film, but it uses that to its advantage. It’s setting feels like a real home in an isolated forest, and the fact that most scenes feature Isabel and/or Matt and no other actors allows the viewer to focus on their relationship, which is really the epicenter of the film. Ringeling and Montt both give excellent performances in roles that require a full range of emotion, and Phillips wisely gives them room to operate, even within the film’s slim 85-minute runtime. The two actors have excellent chemistry as well, making them believable as a couple even when the script has them at odds with one another.

Shortwave also has some commonalities with this year’s excellent indie A Dark Song in that while it is unapologetically a genre effort, it isn’t afraid to really dig into the foundation in which is plot is based. In the case of both films, the foundation is two damaged people dealing with loss and grief under extraordinary, partially otherworldly pressures. Given the grim subject matter, Phillips wisely keeps the pacing brisk and the runtime short. As a result, Shortwave, while serious, doesn’t overuse its ability to raise questions about loss and grief. Instead, it balances them in with solid scares and creative mysteries that seem to have a lot more backstory than what is explained here.

There should be more films like Shortwave, as its successes come as a result of sharp ideas and well-executed direction and performances rather than a huge budget. It manages to carve out a unique perspective in a saturated genre, and triggers the heart and mind in addition to the adrenal glands. Though it ends a bit abruptly, it still manages to feel like a complete experience, and has some genuinely scary moments. Shortwave is definitely worth watching as horror film, as a domestic drama, and as a showcase for the talents of its stars and its director.