Asmodee Digital, Alderac Entertainment Group and Nomad Games have released a new teaser trailer for their official adaptation of the best selling shufflebuilding card game, Smash Up, which will be arriving next week on Steam, Google Play for Android and the App Store.  This new teaser provides a few more details on the game.  Watch it below… 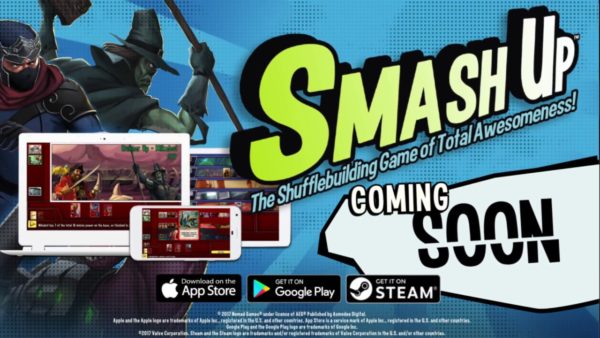 Originally designed by Paul Peterson, this official adaptation of Smash Up will allow players to combine different factions to form unique strategies.  There will be nine different factions for players to choose from ranging from pirates and ninjas to robots and zombies.  Players will choose two factions and capture the bases on the board to gain points and the first to reach 15 points is the winner.

The Golden Geek Best Card Game nominee Smash Up is now available on its digital version! A shuffle-building game where you need to pick two factions and shuffle them to build your deck. To earn the victory the principle is simple, you need to capture the bases on the board to earn points, when you reach 15 points you win the game! So, are you more into Aliens-Pirates or Robots-Sorcerers?

Look out for Smash Up arriving on Steam and mobile devices next week.