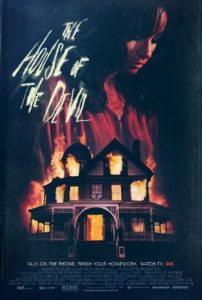 Cash-strapped college student Samantha responds to a job advert asking for a babysitter, hoping to use the earnings to help pay for her new apartment. However, when she arrives for the job, Samantha finds herself fighting for life in a series of bizarre and terrifying situations, all of which seem to be connected with a fabled lunar eclipse. 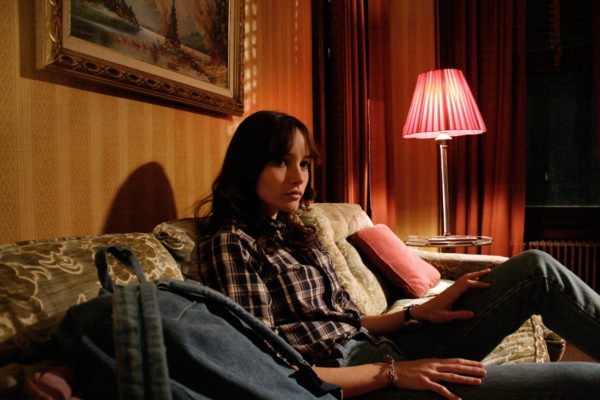 The 80s were great, weren’t they? Big hair, big music, big phones, big shoulders, big Reagan and big everything. And it seems that in recently we’ve all fallen in love with the decade once more thanks in part to the runaway success of Netflix’s 80s set supernatural drama Stranger Things (which I highly recommend).

So for today’s entry of October Horrors, we’re going back to the 80s, sort of, with the slow-burning and wonderfully retro 80s-set horror The House of the Devil.

I’d also like to thank Flickering colleague Sean Wilson for recommending this film for me to spotlight. So thanks, Sean.

The thing that strikes you from the moment The House of the Devil starts is the way it looks. The film stock looks slightly less clean and a bit more grainy, the camera doesn’t move in quite the smooth way that most modern films would, the film stops to give us get a really good look at the opening and closing titles, and you can really notice it when the camera decides to zoom in.

The film does a fantastic job of looking and feeling like a film that was made in the 1980s, with director Ti West’s love of the genre clearly shining through every frame, with it even being filled with subtle references to horror films of the past.

It’s no accident that the film begins with a bogus “true story” style moniker ala The Texas Chain Saw Massacre. Also, the way every has their hair styled and their choice of clothing suggest that either it’s the 80s or a hipster convention. Take your pick.

The cast of the film is made up of people who, strangely enough, have appeared in films that I’ve reviewed previously, which did make the film feel a bit like they had all returned to punish me for giving their movies bad reviews. 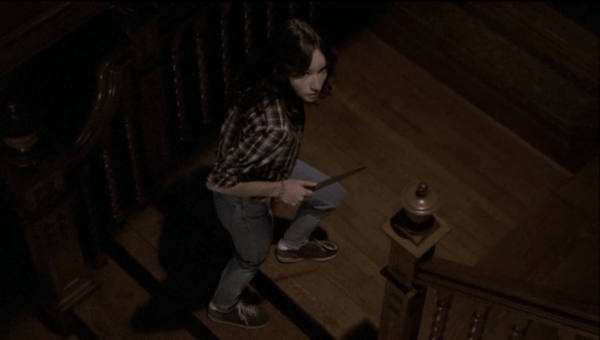 We have Jocelin Donahue who appeared in Dead Awake (a film that put me to sleep), Warhol favourite Mary Wornov who appeared in the festive slasher Silent Night Bloody Night (which was a pile of bloody shite) and the always unsettling Tom Noonan of Manhunter (a film which I can’t praise enough).

Thankfully, Donahue is much better utilized in this film than her later work, with her performance as Samantha an endearing one, with her cash-strapped plight and general warmth making her an easy heroine to root for.

Noonan is also in fine form as Mr. Ulman, possibly the most anxious and kindly of all creepy old horror men with every moment where it looks like he might violently murder Samantha being followed by an embarrassed apology. You almost find yourself liking the guy and feeling embarrassed for him.

We also have some fine support from indie favourite and Mumblecore queen Greta Gerwig as Samantha’s friend Megan who manages to provide some enjoyable comic relief despite her only being in the film for about 30 minutes.

Now while I love this film for its cast and for its perfect recreation of an 80s horror film, it isn’t without some serious flaws which could hold it back from being accepted by more casual horror fans.

The biggest issue is the film’s pacing which while great at building tension, takes the “slow burn” approach about too much to heart, with the film feeling just a little bit too slow and often boring at times.

And it must be said that despite the obvious care and attention that went into recreating the feel of an old 80s horror film, at least in those films a fair amount of stuff would be happening, whether it be sexy drug parties or a masked lunatic showing up to ruin said sexy drug parties. 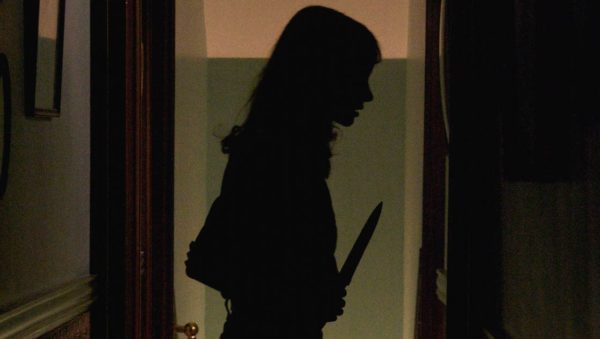 In The House of the Devil, most of the film seems to be dedicated to just watching Samantha take a leisurely tour around the creepy old house she finds herself confined to for the night, with the most noticeable thing to happen being when she decides to stick on her Walkman and a have dance to The Fixx’s One Thing Led to Another.

That scene is actually a lot of fun though and before you know it one thing leads to another (sorry) and you’ll have that song stuck in your head for about a week.

In fairness to the film though, it does pick up in the third act with it having more than enough of gore and Satanic imagery that more than makes up for the slow second act. I also really like the classic sequel baiting freeze-frame ending, it’s just nice little cherry on the delicious retro cake that is this film.

The House of the Devil is a film that I think is likely polarise viewers.

Die-hard horror fans will love it for its pitch-perfect retro recreation approach, while more casual horror fans will likely be irritated by the lack of scares and a slow pace that can sometimes leave the 90-minute runtime feeling like an eternity.

I find myself somewhere in the middle. I love the retro style and I often found myself geeking out over the various little touches that director West adds to make the film feel like a product of the 80s. However, the slow pace does leave the film dragging and I found myself constantly checking to see how much left I had to watch.

However, I’d still recommend The House of the Devil despite its flaw. Overall, it’s a solidly spooky watch that acts as the ultimate love letter to the cult horror classics of the 80s