Jacob Singer is a seemingly normal man living a seemingly normal life when he is suddenly confronted with a series of strange events and even stranger visions. With his life becoming ever more chaotic and his visions ever more nightmarish, Jacob attempts to uncover the truth behind a traumatic event that he was involved with during his time as a soldier in Vietnam. Psychological horror is perhaps among the most complex and fascinating of horror sub-genres. With it often delving into the intricacies of the mind, madness, life, death and beyond, psychological horror has the rare opportunity to tell much deeper stories than any common garden gore splattered slasher flick.

In my view one of the finest that this sub-genre has to offer comes in the form of Adrian Lyne’s dark and influential psychological horror Jacob’s Ladder, a film that tackles deep themes in a masterful and disturbing fashion, but also somehow manages to make the viewer feel emotions that very few horror films manage to.

Tim Robbins gives one of his most underrated performances as Jacob Singer, a normal man whose life seems to become increasingly less normal. Robbins excels at creating a sensitive and relatable character, with the actor brilliantly portraying the mental torment and anguish that the character endures as his visions become even more vivid. It’s a performance that I feel really deserves a lot more attention, with it, in my view, ranking as one of his finest.

Jacob’s Ladder is a horror of the slow burn variety. Focused less on shocking the audience with jump scares, but instead more on building a disturbing atmosphere while also analysing much deeper themes.

The imagery on display is, in my view, some of the most frightening and disturbing that I’ve seen in any horror film, with the distinctive “head spinning” imagery (created by filming an actor shaking their head quickly at a low frame rate and then playing it back at normal speed) being a particularly nauseating and unsettling highlight.

The film’s Vietnam-set opening is particularly upsetting and disturbing scene as Jacob and his fellow soldiers very violently and suddenly lose their minds, suffering violent seizures and fits of madness. One shot of soldier violently spinning around uncontrollably is an image really lingered in my mind long after the scene had passed, with the POV shot being particularly disorientating.

Surely the most disturbing scene of the film is when Jacob is wheeled through a hospital that becomes increasingly hellish, with deformed patients surrounding Jacob on all sides while dismembered and bloodied limbs litter the floor. 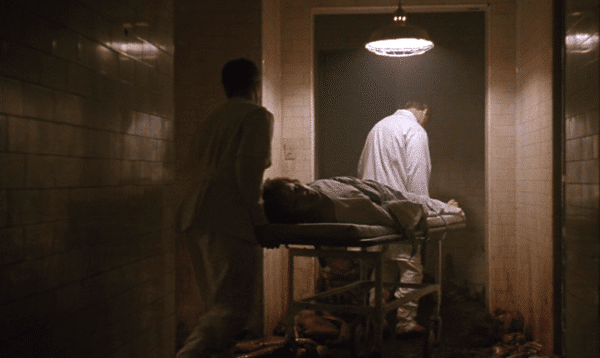 It’s a scene where the music gets louder and more intense as the imagery becomes more and more hellish, before suddenly taking us to a quiet operating room in which Jacob is strapped to a table and subjected to barbaric medical “treatment”.

When a doctor dismisses Jacob as “already dead” and when Jacob replies “I’m alive”, I find the doctors response of “Then what are you doing here?” to be particularly chilling in a manner that I can’t explain, with the actor’s delivery being pitch perfect in its sense of mockery and malice.

However, it’s also the subtle little touches that never failed to unnerve me. Just notice the parade of blank faces looking out the window of a subway train that Jacob narrowly avoids being hit by. There is just something about that image that makes my spine tingle.

Or the deeply chilling yet brilliantly simple scene in which an off-screen voice says “dream on” to a bedridden Jacob who weeps at the sight of who or what said it, with the film cleverly never showing who or what said it which only adds to the chilling nature of the scene.

On a side note, one thing that long-time survival horror fans might notice when watching is that the many aspects of the film are eerily reminiscent of the Silent Hill video game franchise, with several locations, visual aspects and even some of the monstrous creature designs being cited as influences upon the hugely successful video game franchise.

The story of Jacob’s Ladder is an intriguing one in the sense that it toys with your expectations.

Initially starting as a war film, it soon turns into a drama about a veteran adjusting to his post-war life, before settling into what feels less like a horror film and more like a 1970s conspiracy thriller, with Jacob and his former platoon believing themselves to be the victims of a sinister government cover-up. The horror in the story surrounds Jacob’s dwindling grasp on reality and his belief that he is being chased by demons, but also that these visions could be related to experiments he was subjected to during his time in Vietnam. However, I would argue, (and this is just my interpretation) that the real monsters of the film are not the gruesome demons we see on-screen, but the real monsters are Jacob’s memories, both of his time in Vietnam in which he almost died, and also the death of his young son Gabe. The demons are merely a physical manifestation of these memories that either Jacob won’t let go of, or more disturbingly, memories that won’t let go of him.

This theme of being haunted by our most traumatic memories also subtly hints at the film’s twist (which I won’t reveal) with a small and clever clue arising from a conversation between Jacob and his chiropractor Louis (Danny Aiello) in which the latter quotes the Christian mystic Meister Eckart’s interpretation of Hell, a curious one that differs widely from the conventional wisdom of eternal damnation.

It’s a conversation I wish I could discuss more, but to do so would really be spoiling things. Just watch the film.

Despite Jacob’s Ladder being a horror film filled with disturbing and horrific imagery, the strangest thing about is how it makes you feel when it comes to an end.

Most horror films will end with a final jump scare, making sure the audience goes home with nightmares on standby for when they go to sleep.

Jacob’s Ladder, by contrast, ends with feelings of closure, of solemnity, and of poignancy. An ending that leaves you feeling at peace and even, dare I say it, happy. Again, this is one aspect where I really can’t go into details without spoiling everything about the film, so for God’s sake go and get it watched already.

With an ever-changing but always fascinating story that burns slowly with flashes of nightmarish darkness, surreal imagery that will haunt you for days and a tender and engaging lead performance from Tim Robbins, Jacob’s Ladder might not be for everyone but this is easily one of the finest psychological horrors out there.