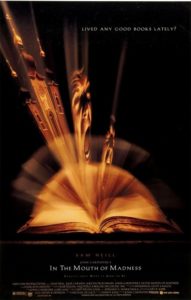 The world is literally going crazy for the work of horror novelist Sutter Cane who has mysteriously vanished. With the release of his newest novel rapidly approaching, Cane’s publishers recruit insurance investigator John Trent to determine whether or not his absence is a publicity stunt or a genuine cause for concern. Trent’s efforts to find Cane soon lead him on a mind-bending trip to Hobb’s End, a mysterious little town with something deeply evil lurking beneath its cozy exterior, an evil that leaves Trent questioning the very nature of reality itself.

Over the course of his unofficial “Apocalypse” trilogy, John Carpenter has regaled us with tales of shape-shifting aliens and demonic entities threatening to break loose and destroy life as we know it

However, with In the Mouth of Madness, Carpenter offers an apocalypse that is a bit more down to earth – an apocalypse not caused by the devil or aliens, but an apocalypse caused by madness and the forces that lurk beyond the veil.

Sam Neill gives a brilliant performance as John Trent, who despite being a fairly unlikeable and deeply cynical douche bag, is made a fascinating and, at times, a funny protagonist, primarily due to Neill’s natural charisma. I especially like Trent’s introduction to the film, locked in a mental asylum with a cross marked face and manic eyes with an almost gleeful sense of darkness in them. Jurgen Prochnow also gives a terrific performance as Sutter Cane, the elusive horror novelist who people are literally going crazy for.

Prochnow projects a powerful screen presence that elevates this supposed “hack” novelist into something more akin to omnipotent, omnipresent deity. One who can change anything he wishes about the world with the simple tapping of his typewriter.

I just love the nonchalant way that he utters the terrifying phrase “I’m not going anywhere. I’m God now. Don’t you understand?” Or how he somehow manages to make turning the world blue seem terrifying.

Whereas the previous installments of Carpenter’s “Apocalypse Trilogy” dealt with threats to humanity’s via alien invasion or Satanic machinations, In the Mouth of Madness offers possibly the most surreal apocalyptic scenario. An apocalypse caused by fandom, with people literally rioting and murdering each other over not being able to get their pre-orders for Cane’s latest novel.

And we all thought the hype surrounding the last Harry Potter book was crazy. Just imagine seeing images of riot police battering little kids in wizard costumes on the News at Ten. It’d be hilarious. 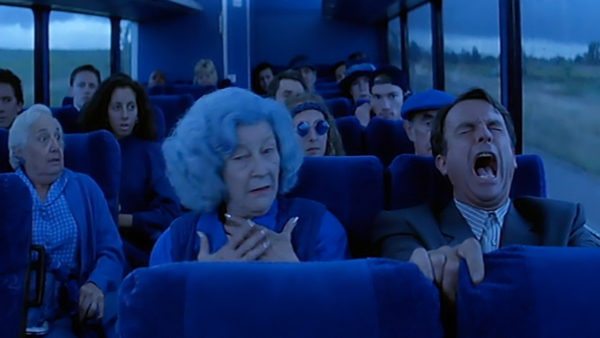 The other core theme of the film is that of reality vs fiction with the film constantly toying with the characters (and the viewer’s) perception of what is real and what is fiction.

You might think the stuff with the crazy monsters and murderous townsfolk is the fictitious world of Cane’s horror stories. However, as Cane’s editor, Linda says “A reality is just what we tell each other it is. Sane and insane could easily switch places if the insane were to become the majority”.

If there is anyone whose fingerprints are all over the film it’s one man and it’s not John Carpenter. Instead, the film is a giant love letter to the father of literary cosmic horror, the one and only HP Lovecraft, with the film loaded with references to his writings and their common themes of cosmic monsters driving men to madness.

Even the film’s title is a giant love letter to Lovecraft, being a play on the title of his popular work At the Mountain of Madness. Now if only Guillermo del Toro can finally get a film of that made and I’ll have a review slot filled for October Horrors 2018.

While I heaped praise on Carpenter’s previous installments in his loose trilogy, going as far to proclaim Prince of Darkness as one of best horror films ever made, I hesitate to do the same with In the Mouth of Madness.

The film while definitely one of the better films from Carpenter’s recent output lacks the same level of fun, intrigue, and excitement as the previous two efforts in this unofficial trilogy.

The story, while interesting and certainly creative, felt rushed in its presentation and was quite possibly too ambitious to try to cram into a 90-minute runtime. While some might disagree, I honestly feel that the film could have done with another half hour or so to maybe flesh things out a bit more, or to at least give us more time to become invested in the story. The film also just isn’t as much fun as the previous installments with it feeling like a bit of a chore to slog through often leaving me checking repeatedly to see how long I had to still to watch.

In the Mouth of Madness is a film that for years has Carpenter fans. Some view it as the last truly great film from the veteran horror master, whereas others find it to be a confusing mess of a film that represents the unfortunate decline of his work in the 1990s. I stand somewhere in the middle of this divide.

On one hand, I loved the concept of the film despite its flaws, with the idea of people’s love of fiction literally making them crazy being wonderfully creepy. I also loved the lead performance from Sam Neill with him being a unlikeable but still engaging protagonist, especially in the big reveal at the end.

On the other hand, the story could have been fleshed out better with a longer runtime, with the pacing and execution of some parts of it could have been improved to make it less of a maddening slog.

While not as good as the previous installments, In the Mouth of Madness is overall a fine but somewhat disappointing conclusion to Carpenter’s “Apocalypse Trilogy” and I would agree that it perhaps represents the last hurrah for the veteran horror master. Check it out if you’re curious.

While this might be the end of Carpenter’s trilogy, this is not the last we’ll see of him this month. Till then though I have a demand to make dear readers; “either put on the glasses or start eating that trash can!”