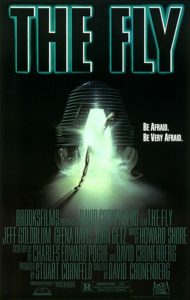 Seth Brundle is an eccentric but brilliant scientist who has invented a pair of device that could change the world; teleportation pods. Deciding to test his inventions by teleporting himself, Brundle fails to notice the presence of small fly that has joined him in the pod. With the pods inadvertently fusing the DNA of Brundle and the fly, the human guinea pig soon begins to undergo a terrifying transformation into a human insect. 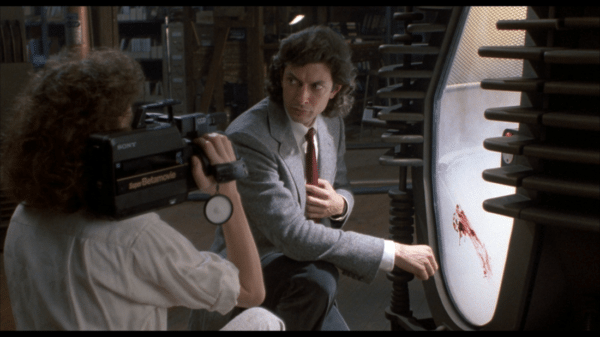 Of all sub-genres of horror, the one that really freaks me out is the one dubbed “body horror”, a genre that depicts often the human body undergoing some kind of gruesome and terrifying transformation through scientific mishap or parasitic infestation.

The master of this genre for years was the Canadian director David Cronenberg who brought us the disgusting delights of Shivers, The Brood and Videodrome to name but a few.

While he made many films dealing with “body horror”, his crowning achievement in this especially unpleasant genre would come in the form of his 1986 masterpiece The Fly – a film that demonstrates not just the brilliance of Cronenberg’s talents but also serves as the one of the examples of a horror remake done right.

As Seth Brundle, the hapless genius who finds himself undergoing a terrifying transformation, Jeff Goldblum is fantastic in a performance full of eccentric and arrogant brilliance and quirky charm.

You find yourself being charmed by his enthusiasm for all things science and you honestly believe him when he says he’s “going to change the world as we know it”. And it’s this likeable charm that makes his eventual transformation from man into insect all the more tragic, with this charming persona rapidly withering along with his humanity.

It’s when the character begins to change that Goldblum truly excels, initially adopting subtle changes to his personality such as a being more talkative and energetic (going “Full Goldblum” if you like) but also becoming even more impulsive, bossy and arrogant. 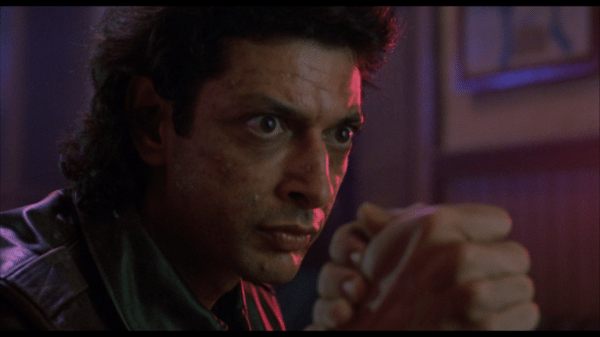 Yet, as Brundle’s becomes less and less human, Goldblum manages to switch gears and creates a truly moving portrayal of a man whose humanity is literally falling apart. You can’t help but find yourself feeling genuinely sorry for him when he begs “help me, please help me”, even when he’s barely recognisable under layers of heavy make-up.

I also like how Goldblum cleverly injects little ticks and movements to the character as the transformation nears its end, with the stuttered speech pattern and rapid head twitching being eerily like that of a fly.

Brundle’s story is a stock horror story in which he turns into a fly-monster and goes around terrorising people with his acid vomit. Instead, Cronenberg presents Brundle as an unfortunate victim of his own arrogance and eccentricity, with his transformation into a monster being more of a punishment for his hubris, a transformation that derives feelings more of pity than of fear.

While you could argue that his final plan to merge himself with his lover Veronica (Geena Davis) and their unborn child is an evil plan, I instead view it more as a plan born out of desperation. He doesn’t want to die as some kind of insect monster and he feels that his desperate plan is the only way for his humanity to survive. You might hope that his desperate plan will fail but you can understand why he feels it’s his only option.

While Goldblum’s performance is fantastic, it would be nothing without the incredible special effects and makeup by Chris Walas and Stephen Dupuis, with easily being some of the greatest ever committed to film. 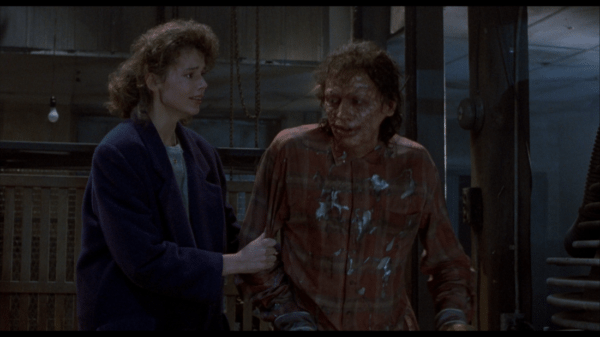 The physical changes, like the personality changes, are subtle at first with the initial signs of Brundle’s transformation registering as symptoms more akin to a bad skin condition. Throw some Clearasil on your face and that rash will clear right up Jeff.

It’s when the transformation moves into the rotting skin, spitting teeth, vomiting on your food stage that Walas and Dupuis’ effects really begin to shine and bother your lunch, with Goldblum rendered barely recognisable under the layers of brown and bumpy flesh that the pair encases him within. The final skin peeling, face splitting stage of the transformation is quite simply a gruesomely beautiful work of art, with that final reveal of Brundle’s insect face being one that still freaks me out to this day. Quite simply, the pair more than earned the Oscars that they won.

In addition to its great acting, direction and special effects, The Fly is also gifted with what is easily one of the greatest scores to any horror film EVER.

Composed by regular Cronenberg collaborator Howard Shore (who also scored The Lord of the Rings), the score sounds somewhat reminiscent of the scores from old school monster films, packed full of big loud crescendos full of strings and brass. A grand and majestic score that fits perfectly with the gruesome sights never for a second sounding hokey or corny. 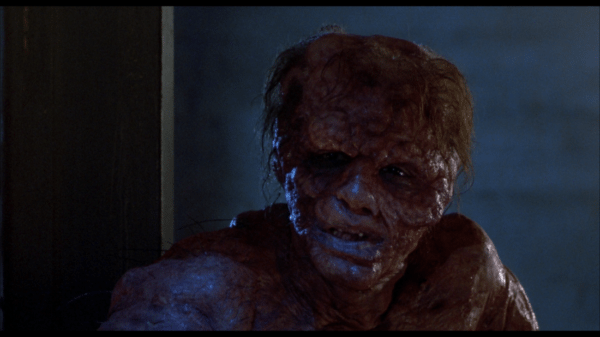 The thunderous theme that blasts in the film’s tragic finale is easily one of my favourite horror themes of all time, with it managing to perfectly portray an atmosphere of terror and tragedy.

With an electrifying and tragic lead performance from Jeff Goldblum in one of his best roles, a terrifying stomach-churning story and fantastic effects that ranks as some of the best ever committed to film and one of the greatest horror film scores ever composed, The Fly is simply one of the best “body horror” films out there.

Check this one out. Just don’t watch it when you’re eating.