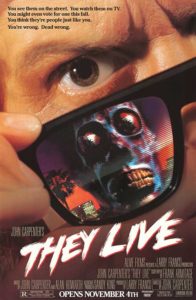 An unemployed drifter arriving in Los Angeles looking for work who, thanks to a pair of special sunglasses, uncovers a mysterious conspiracy in which humanity has been enslaved by greed, consumerism, and ignorance by a sinister alien presence hiding in plain sight. 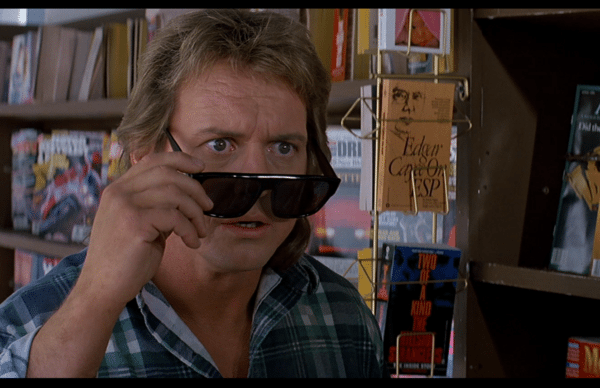 For the second year in a row, we’ve survived another 31 days of October Horrors.

This year we’ve looked at the wide variety of the kinds of horror the big screen can offer. We’ve had sci-fi horror, body horror, satirical horror, psychological horror, horror that arguably isn’t horror but this is my list so I’m talking about it anyway, and so on.

We looked at films with all manner of monsters from serial killers, aliens, space vampires, psychic teens, murderous hitch-hikers, Satan himself and of course “The Shunting”. So if I’ve done anything with this series this year, at the very least I’ve given you all an eclectic selection of films for you to choose from on your Halloween movie binge.

Alas as with all good things (or bad if you’ve hated my reviews) we must bring this ghoulish series to a close.

I thought long and hard trying to decide what film I was going to wrap up this year’s edition of October Horrors with. I scanned the shelves, scoured the second-hand shops, surveyed the internet and asked random tramps on the streets for their suggestions but alas the struggle continued.

Then I took one look at the news and the turmoil that our world is in with its rampant consumerism and political fragmentation and it all reminded me of a certain film in which a WWE legend puts on some sunglasses and sees the world “as it really is”.

This brings me helpfully to John Carpenter’s timeless action horror cult classic They Live, a film that even after nearly 30 years still feels relevant in our crazy polarised world.

So get ready to chew bubble gum and kick ass, even if you’re all out of bubblegum. This is They Live.

The late wrestling legend Roddy Piper takes on the role of an unnamed drifter (credited as Nada in the end credits) who arrives in Los Angeles looking for work. 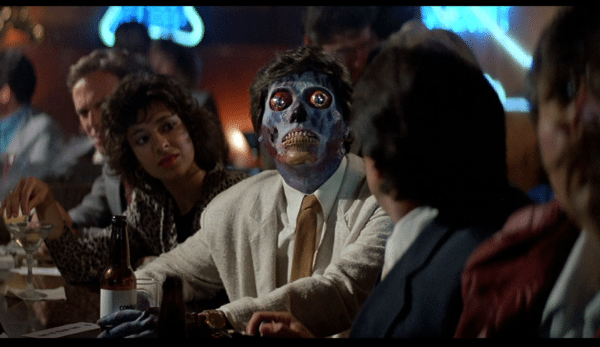 Piper is fantastic in the role with his initial earnest and pleasant nature and relatable plight quickly endearing him to the audience. I mean who among us hasn’t had to go through tough times when all we wanted was for someone to just give us a job.

However, it’s when Nada finally dons that special pair of sunglasses and sees the world as it really is that Piper really comes into his own. Full of fury, wit, and one-liners, Piper is a one-man wrecking ball ready to reap vengeance on the sinister cabal of extraterrestrial tyrants ruling over humanity and getting rich while doing it. Forget Bruce Springsteen, Roddy Piper is a real working class hero, kicking ass and chewing bubblegum all the way to the bank. Literally.

Keith David (returning from Carpenter’s The Thing) is also fantastic as Frank, a fellow drifter just looking to keep his head down in the world and earn an honest living. David acts as a perfect cynical counterbalance to Piper’s initially optimistic view of the world. Frank’s monologue about how the world works as a giant competition is a highlight, with David’s cynical and funny delivery helping to set up many of the film’s core themes.

Like Piper, David also excels at making the character relatable. I imagine that many viewers could relate to the characters fury and frustration when David tells the story of losing his job at a factory, a story that was likely not too different from the stories of many American (and British for that matter) industry workers in the 1980s.

Full of riots, gun battles, and explosions, the film is much more akin to an 80s action film, with the regular one-liners for Piper do little to help dispel that impression. The action is great fun though, with it making the film a fast-paced thrill ride that’s a whole lot of fun.

The stand out action scene is, of course, the now iconic fight scene between Piper and David, a brutal five-minute brawl in which every punch, kick, headbutt and crash landing on the hard pavement being felt with bone-crunching ferocity. The fight is rightly dubbed as one of the greatest ever filmed, with its crisp editing and brilliantly shot presentation being a nice refresher from the modern quick cut handheld fights of current action films. 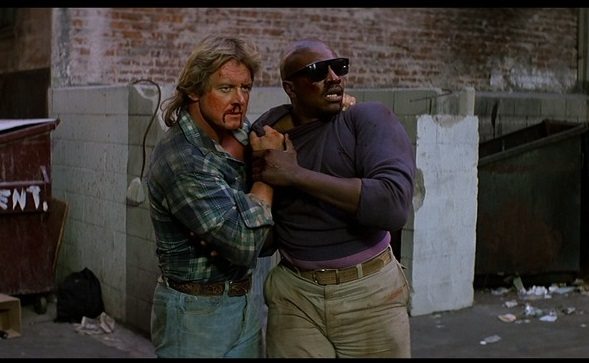 It’s in the story though that the real meat and potatoes of the film are to be found with it being a horror film of sharply written and scathing satire.

The sunglasses reveal that the world is being run by a sinister cabal of aliens and human cohorts that keep humanity subjugated with a steady diet of excessive consumerism and subliminal messaging commanding them to “OBEY”, “CONSUME” or “MARRY AND REPRODUCE”, all the while living among the humans in disguise, ready to rat out anyone who can “See” them.

With this in mind, it’s not hard to figure out the target of Carpenter’s satire, with the film being a funny and smart (if admittedly guarantees) attack against “Reaganomics”, US president Ronald Reagan’s flagship economic policy which saw a massive explosion of capitalism and consumerism in the 1980s. The film even has a Reagan surrogate in the form of an alien on TV using the late Presidents famous “Morning in America” slogan. On a side note, one of Reagan’s other famous slogans, funnily enough, happened to be “Make America Great Again”. Just saying.

If anything, it’s message of excess capitalism and media control by elites is even more relevant what with the likes of Mr. Murdoch constantly trying to expand his media empire, not to mention the terror reaped by the corporate greed that led financial crash of the last decade.

The characters of Nada and Frank can be seen as representing the working class who suffered tough times under Reagan, with his economic policies also leading to the dismantling of certain American industries, at the cost of many jobs. In short, while some became rich under Reagan there were many who became poor. 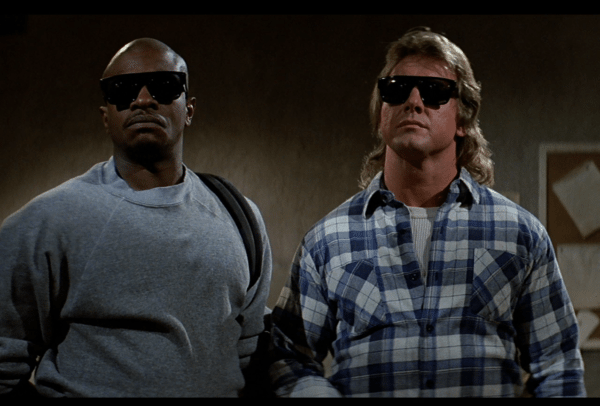 However, according to Neo Nazis (a group noted for their cultural sophistication) the film is not actually about Reagan or his economic policies at all. Instead, the character of Nada they claim is some kind of revolutionary right-wing hero leading the charge against the real evil rulers of the world: you know – the Jews.

Having watched the film, and read as much as I can about it I honestly don’t know where they get this idea from aside from a handful of signs in the secret alien underground base with writing on them that from a distance look slightly like Hebrew, but in close-ups can clearly be seen just standard alien nonsense. Thatlong story short, the film is not a right-wing expose about the evils of the Jews, but it is, in reality, a left-wing satire about the evils of Reagan era excess capitalism.

Now let’s just hope the comment section of this review doesn’t blow up into some kind of anti-Semitic demolition derby of bullshit and bollocks.

They Live is a fast-paced, fun, sharp and brilliant piece of 80s action horror satire and I sincerely hope that the idiotic ramblings of a few bigots and their wrongful interpretations of its message will not sully its reputation as such.

If you watch any film this October please do the right thing and make it They Live because it’s possibly one of the greatest films of the 1980s and it still manages to feel relevant even after nearly 30 years since it’s release.

So please I implore you, watch They Live not just because it’s brilliant, but mainly to save it from being ruined by the most loathsome people in civilized society whose wrongful and dangerous interpretation threatens to ruin the film for everyone.

Thank you very much for joining me on these 31 days of October Horrors. I hope you have enjoyed reading these reviews as much as I have had writing them.

Here’s hoping that you’ll be able to join me next year for another 31 days of October Horrors (unless my Flickering overlords see sense and fire me) and do feel free to offer suggestions in the comments section for films, TV shows or video games (I have big plans for next year) you’d like to recommend. Till then have a very safe and happy Halloween.