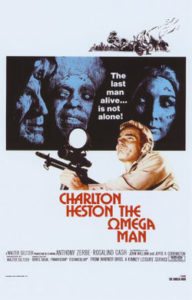 Government scientist Robert Neville struggles to survive in a world where much of humanity has either been wiped out by biological warfare or they have been transformed into nocturnal creatures hell-bent on having him killed, with Neville possibly being the last normal human left on the planet.

In 1954, Richard Matheson published his novel I Am Legend, a chilling work about the last surviving human in a world overrun with vampires. It’s an influential novel that has left a long legacy, with it helping to inspire the modern zombie genre, with the late zombie king George A. Romero citing the book as an influence on his debut film Night of the Living Dead.

The novel itself has been adapted to film several times with various degrees of success, most recently in 2007 with Will Smith in the lead role – a film that, while not terrible, is rather mediocre and forgettable.

For my money, the best adaptation of Matheson’s celebrated novel comes in the form of the supremely daft 1971 action-packed cult classic The Omega Man. A film that features the ridiculously glorious sight of Moses himself mowing down scores of albinos trying to take his beloved guns away.

In the lead role as humanity’s last hope is the legendary Charlton Heston and do we really need to talk about his acting abilities. I mean I know he won an Oscar and he was pretty good at leading the Jews out of Egypt or battling those damn dirty Apes, but let’s be perfectly honest, Heston’s acting range is a just a tad limited. Regardless of his limited range though, I personally love Heston in this film.

Dishing out more death than smallpox and firing off one-liners about the Inland Revenue Service, all the while being a cool-headed customer while he relaxes in his swanky besieged bachelor pad, Heston makes the film work with his towering screen presence making his every scene of an absolute joy to watch.

Also, it is pretty funny to see the famously liberal turned gun-loving conservative Heston sitting down to enjoy the 1970 hippie masterpiece, Woodstock, Reciting the weed drenched ruminations of a random hippy or relaxing to some groovy songs about love and weed.

The film, while hardly an artistic masterpiece, does have some pretty nice touches scattered throughout. The opening shots of Heston driving around an empty Los Angeles are always impressive to watch, even if the streets to sometimes look a tad too tidy for a city ravaged by an apocalyptic cataclysm, either that there strewn with newspapers like a barrage of angry paperboys just exploded before Heston arrived on the scene.

Again, the commenters will be denouncing me at their pulpits that “this isn’t horror you idiot” to which I say, it’s based a horror novel and it has horror elements to it, so it somewhat counts. Although, as a horror film it completely fails at being even remotely scary. Although the shots of dead corpses in abandoned cars and buildings are somewhat eerie.

The monsters of the film are an extremist group of hooded sunglass-sporting nocturnal albino’s dubbed “The Family” led by newsreader turned Amish extremist Anthony Zerbe (who is all kinds of hammy awesome in this film) who long to make Heston an example and kill him for his sinful devotion to the old world with its guns and gadgets. One slight problem though, The Family are f**king useless and are about as threatening as the real Amish. They simply can’t compete with the sheer unbridled force of manliness that is Charlton Heston who simply shoots them dead en-masse whenever they make too much noise at night.

In fact, come to think of it, if Heston wanted a film that acted as a great promotion of the advantages of gun ownership then this film certainly does the job. It’s the best propaganda film the NRA never made.

The film’s first half is probably the best part of it, with it being a gloriously fun romp as Heston wages his one-man war against the albino armies of the night. However, once more human survivors appear the film slows to a crawl and becomes a rather boring affair, although it does pick up in time for the big action-packed finale.

The film also happens to feature one of the earliest instances of an interracial kiss in a major film, so it at least gets points for further breaking down barriers. Although the film does lose those points for ending with one of the most ham-fisted and unnecessary uses of corny religious imagery ever. I guess Heston just really wanted to play Jesus.

With Charlton Heston doing what he does best, making sure those damn liberal albino’s don’t take his guns away, and featuring plenty of action and excitement, The Omega Man is definitely my favourite adaptation of Richard Matheson’s celebrated novel, even if it completely abandons everything that the novel stood for.

A glorious slice of 70s sci-fi cheese that, despite its flaws is a good bit of fun. Check it out and remember: “THERE IS NO PHONE RINGING DAMMIT!!!”