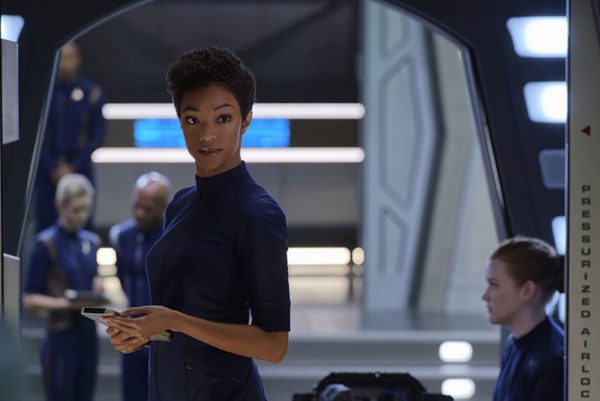 All my life, the conflict inside me has been between logic and emotion. But now, it’s my emotions that are hiding.

In my review of the first episode, I spoke a little about the parallels between Michael Burnham and Spock:

“Much as Spock was the first Vulcan to join Starfleet, Burnham is the first human to join the Vulcan science academy; in turn, then, Discovery is able to evoke the same internal struggle the original show explored, and consider it through a new lens.”

That idea is touched upon again in this episode, so it’s worth delving into it a little more. It positions both characters as outsiders, not quite at home within their own culture or their adopted one. That much is obvious; everyone knows about the duality of Spock and his internal conflict. In evoking the same conflict, Discovery is able to position itself as a direct successor; it’s a new take on the character dynamic that Spock, Data, and Odo all fulfilled. At this stage, it’s worth asking the question – does it actually work?

The emotional climax of ‘Lethe’ is the revelation that Burnham, though rejected from the Vulcan Expeditionary Force, would have been able to join the group… if it weren’t for Sarek’s choice to prioritise Spock. Of course, there’s a certain dramatic irony to that, given we already know that Spock ended up choosing to go to Starfleet himself. (Is that perhaps due to Burnham’s inspiration? Maybe; it’s not out of the question.) This revelation proves something of a watershed moment for Burnham, prompting her to reassess and try to engage with her own emotions properly.

And, you know, it’s fine. There are no massive glaring flaws, particularly; having said that, I can’t help but feel there’s room for this to be explored more deeply than it has been so far. Burnham is grappling with the guilt – justified or not – of starting a war, losing her mentor and friend, and the uncertainty of getting a new chance she isn’t quite sure she deserves. They’re huge emotions on their own terms, difficult to deal with for most people – particularly so for someone who’s never really addressed their feelings head on. Is the most interesting content you can get from that “I feel hurt, but also hope”? It’s just a little lacking in subtlety. And a little bland too, to be honest. 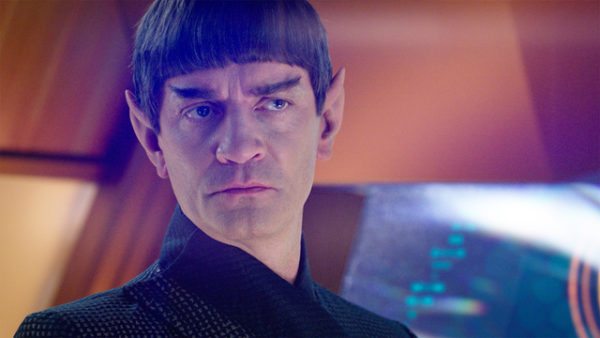 In keeping with the above, there is something that I am inclined to be a little more critical of: Discovery is struggling to move beyond the Planet of the Hats.

If you’re unfamiliar with the term, essentially it refers to a culture defined by a single ubiquitous character trait. Every single Vulcan is logical. Every single Klingon is a warrior. Every single person on the planet of the hats wears hats all the time. It’s a prominent sci-fi genre convention (or cliché, if you’re feeling less kind), and one with plenty of examples across Trek history – pick a random episode of TOS and you’ve got a good chance of finding one.

Discovery, up until now, is pretty much just doing the same thing. Vulcans are all dedicated to logic, Klingons to war, Kelpians are all fearful (or so we’re told); as ever, it’s only the human characters who have differences in aspirations and motivations and even personalities. Yes, certainly, there are differences within that limited scope; while both Sarek and the Vulcan suicide bomber are both dedicated to logic, they’ve clearly got differing interpretations of such. But even then – the Vulcan is a radical adherent to logic. Is that the most interesting thing you could have done with it?

And, similarly, the Klingons again; in a move surprising exactly no one, it’s revealed that their efforts at diplomacy were in fact a trap, a broader part of the war effort. I can’t help but wonder if introducing another faction – a group of Klingons who were interested in peace talks – would have been more interesting. Not only would it highlight the disunity amongst the Klingons, which has been repeatedly emphasised up to this point, it’s another complication to throw in – another side, another agenda, another source of drama.

This planet of the hats mentality is something I’m inclined to be critical of; not only because it’s something that, really, we should be able to move on from now, but because there was a lot of noise from the Discovery production team about how they wanted to put greater focus on the alien cultures. At the moment, that doesn’t seem to have manifested much further than having the Klingons speak in tlhingan hol (a choice that seems counterintuitive to developing them as characters, actually; they all speak so slowly now, a lot of the dialogue is restricted), which I’d happily sacrifice for some more in-depth character work frankly.

Coupled with Burnham’s fairly superficial comments on hurt and hope, an impression forms of a show that isn’t quite willing to push itself – it’s not fair to call it safe, because in many respects it isn’t (and should be applauded as such), but it does feel like they are avoiding the more interesting choices at times. 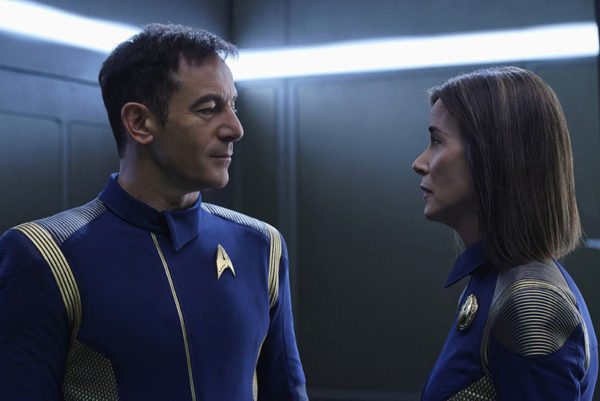 This episode takes another look at Captain Lorca, examining his mental state. We know by now that he’s somewhat off kilter, and certainly not as well-adjusted as previous Starfleet captains. This is proving to be a welcome change; it’s refreshing to engage with the fact that, utopian future or not, the challenges of being a Starfleet captain can and will take a toll on their mental health.

Particularly interesting was the implicit suggestion that Lorca expected the Klingon negotiations to be a trap – sending Admiral Cornwell there deliberately, with the understanding, and perhaps the hope, that if she’s captured he’ll be able to hold onto the Discovery for longer. Certainly, that appears to be the implication when he doesn’t immediately leap to the rescue – the closing shot of his phaser tells us Lorca hasn’t changed just yet, in any case. It’s well portrayed by Jason Isaacs, who’s particularly engaging as Lorca.

A possible ending presents itself, if Lorca’s decline is to continue: Burnham mutinies again, this time more justly, bringing her character arc full circle. It’s an interesting proposition, and one that – for now at least – feels quite likely. (Is it also possible that, as a common fan theory goes, Lorca is one Garth of Izar, a decorated Starfleet Captain from TOS who gradually loses his mind? I’m not quite convinced myself at this point, but we’ll see.)

The rest of the crew didn’t necessarily fare quite so well; where Tilly remains wonderfully charming, the soft reboot of Stamets is a little disappointing, and Saru had no real role to speak of. I’m increasingly convinced that Ash Tyler is in fact Voq – and every episode that passes without an appearance from Voq will surely only further confirm the fact – meaning his growing friendship with Michael was particularly interesting. (I wonder if Tilly’s comment at the beginning about him being attractive is foreshadowing a relationship growing between Tyler and Burnham?)

Ultimately, this episode was… well, it was another pretty good instalment of Star Trek: Discovery. It’s difficult to get particularly animated about the series at this point; it’s perfectly entertaining, not particularly offputting in any meaningful way, and just generally fine. In some ways it’s unfair to ask for more.

But I’m still going to.