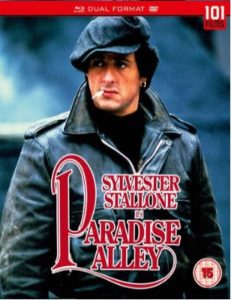 Three brothers in the slums of 1940s New York try to make their fortune by training the youngest sibling to become an underground wrestler.

After the success of Rocky in 1976 Sylvester Stallone was a hot property in Hollywood and was pretty much able to get any passion projects he wanted a green light, which is why between Rocky and Rocky II we got trucking federation drama F.I.S.T. and, more significantly, Paradise Alley. Significant because as well as writing it Stallone also directed it (and in true Little Britain style, also sang the theme tune), which marked his first time behind the camera, setting him up to direct Rocky II the same year, and also because despite sharing many themes and plot threads as Rocky, in Paradise Alley Sly doesn’t play the character who gets a pasting only to come good.

But that does not mean that he isn’t the lead character. Sly plays Cosmo Carboni, a quick-talking hustler who, along with his two brothers Lenny (Armand Assante – Judge Dredd) and Victor (Lee Canalito – Emperor of the Bronx), dreams of making enough money to have the good things in life and be able to leave the slums of New York behind. Lenny is the business brains of the trio and is a little more reserved than Cosmo, mostly thanks to having seen some of the world during WWII and picking up an injury that forces him to walk with a cane, and youngest brother Victor is a huge beast of a man who has a job delivering blocks of ice, simple-minded and gentle until he gets annoyed. After seeing a wrestling match at a local underground club called Paradise Alley, Cosmo puts Victor in the ring against current club champion Big Glory (Frank McRae – Lock Up) and Victor destroys the veteran wrestler, prompting the brothers to train Victor up to wrestle professionally, with Cosmo doing the physical training while Lenny handles the promotion.

However, things in the brothers’ personal lives don’t go so successfully, with Victor losing many of his ice-buying customers thanks to new technology and Cosmo and Lenny falling out over Lenny’s on/off relationship with Annie (Anne Archer – Fatal Attraction), whom Cosmo fancied his chances with. But with Victor beating all of the local wrestlers it isn’t long before he has to take on the mentally unstable Frankie the Thumper (Terry Funk – Over the Top), head goon to local gangster Stitch (Kevin Conway – The Quick and the Dead), which forces the brothers to put aside their differences as this will be the payday they’ve been waiting for if Victor wins.

Paradise Alley treads a similar path to Rocky in that down-on-their-luck working class characters have to overcome a big obstacle in order to win the day and, for the most part, Sylvester Stallone approaches the part of Cosmo in a similar fashion to Rocky Balboa in the first half of Rocky, mainly by being loud, funny, charming and charismatic but thankfully not being as punch-drunk as Rocky is. The opening scenes see Cosmo challenging one of Stitch’s goons to a rooftop race for $5 and immediately we’re rooting for him in the same way we were when Rocky took a headbutt from Spider Rico in the first five minutes of Rocky, and from then on Sly pretty much owns the film as any scene he is in sees him being louder, brasher and more energetic than anybody else on the screen.

But while on the surface Paradise Alley appears to be ‘Rocky-with-wrestling’ it does have an identity all of its own. The post-depression-era New York setting is recreated authentically and Stallone directs some swift camera movements throughout the film to give a heightened sense of action, even when not a lot is happening on-screen, something that he would go on to perfect in later movies. The story itself expands on Rocky’s themes of one man looking to prove himself if only he was given the chance, with three men all with differing talents and motives looking to land that one big payday that will set them up for life, and of course there is the wrestling itself, which is really secondary to the family drama at the heart of the story but is so well shot and feels as realistic as watching a World of Sport match from the 1980s, all 12 minutes of it.

Initially a critical and commercial failure when it was first released, looking at it now Paradise Alley feels like something of a forgotten gem in Sylvester Stallone’s back catalogue. It is rough around the edges but this was a time when Sly was trying to push himself as a dramatic actor and for a directorial debut it does have moments that point the way as to how Sly would direct his later franchise movies but still with the urgency of an artist doing a passion project that he may not get the chance to do again. The only real criticism you can level at it is that is doesn’t quite have the heart and warmth of Rocky, which had only come out two years before and one gets the feeling that if Paradise Alley had come out later in his career then maybe it would be looked upon more favourably and out of the shadow of that movie. But overall, the acting is good throughout and despite Sly stealing nearly every scene the supporting cast all create memorable characters, especially Terry Funk as Frankie the Thumper with his maniacal outbursts, although singing theme song ‘Too Close to Paradise’ does feel like a step too far as far as Sly’s involvement is concerned given that it sounds like a parody in the vein of Vic Reeves’ club singer, and even more questionable when you consider that his singer brother Frank appears in the film so why not let him handle the song? Nevertheless, Paradise Alley has enough going for it despite that odd choice and if you’re a Stallone fan this bare bones dual-format set is a must for your collection.