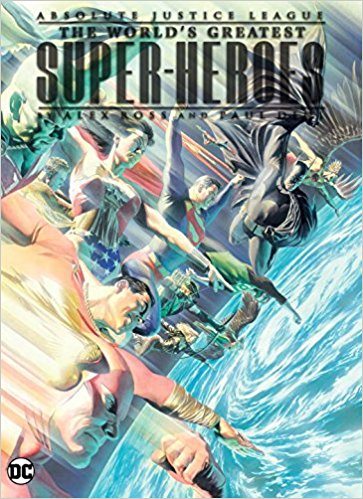 Paul Dini and Alex Ross are two names that are synonymous with some of the best work comics has to offer. Dini created a long lasting Batman series with Batman: The Animated Series, beginning the DC Animated Universe, while Ross has drawn and written some of the best comics and images in the genre, namely Kingdom Come and Justice. The pair teamed up in the early 00s for a series of stories focusing on the heroes of the Justice League tackling real world issues such as hunger, poverty and civil rights and now DC has once again published those stories in the outstanding hardcover Absolute Justice League: The World’s Greatest Superheroes.

Rather than featuring a story where the League goes up against their greatest enemies – such as Ross’ Justice – the stories instead are introspective tales about how much good the Justice League can accomplish with real world issues, examining them as symbols of hope and peace instead of adventuring superheroes. Dini and Ross make them feel very human and relatable as they struggle to conquer things mankind has not been able to stop for generations. Each of the stories bring the heroes down to earth in some very successful ways. 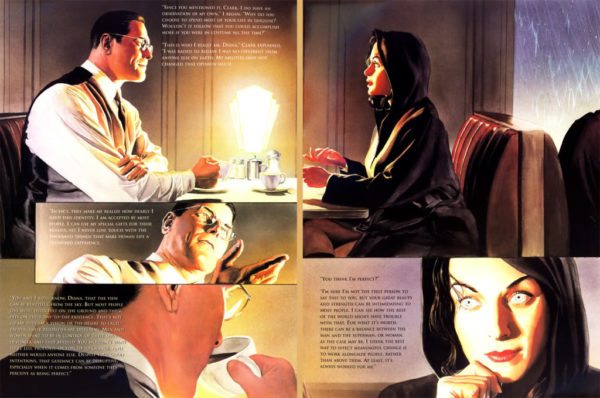 Batman attempts to fight poverty, Superman wants to end world hunger, Wonder Woman wants to find peace and end war and Captain Marvel (now known as Shazam) simply wants to bring joy to a group of sick kids. Dini goes to a lot of lengths to humanize these heroes. Wonder Woman’s ‘Spirit of Truth’ is one of the book’s highlights, offering a view of how she is an ambassador for peace, yet feared in some parts of the world as a powerful warrior. It also examines how Wonder Woman is viewed as a feminist icon across the world, yet is shamed for her attire in some Middle-Eastern countries by the local women. One of the story’s best scenes comes from Diana talking with Clark Kent on how me manages having dual identities and living with the complexities that arise from that, including the views he must get as Superman.

Superman’s story is similarly great as he tries to spread food across the planet. He’s successful for the most part, but has a tougher time in harsher parts of the world that are either too ravenous for food or under the thumb of ruthless dictators who are fearful of foreign outsiders. Batman tries to focus on poverty, one of the root causes of crime, and Dini, who is almost always at his best when it comes to the Dark Knight, delivers a very good story and one of Batman’s most compassionate scenes. Shazam’s ‘Power of Hope’ is a great reminder that Shazam is still just a kid living two very different lives, but focuses on the character’s growing maturity and his realization that he can do so much more than simply stop supervillains and bank robbers. 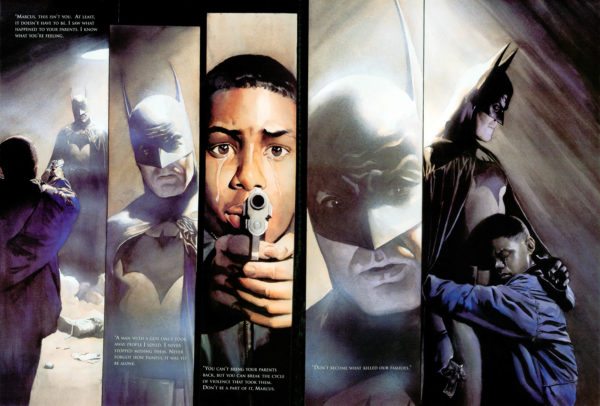 Then there’s the story ‘JLA: Liberty and Justice’ which sees the League trying to stop a deadly disease from spreading across the planet. However, the League’s actions cause concern among Earth’s residents as they take some drastic steps to prevent its spread, entering some countries without its permission or detaining sick people before getting full authorization. It doesn’t help that the disease feeds off people’s fear, making them more afraid of anything and big, powerful people descending from the skies is certainly not good for them.

There’s a nice balance between all the characters here, but the real star is Martian Manhunter as he comes to terms with his place on Earth and the complex thoughts and beliefs of mankind. As a fan-favourite character, its great to see him have such a prominent role. Dini writes Manhunter very well and allows him to deliver a great speech near the story’s conclusion, emphasizing its themes and his journey throughout.  Its pretty satisfying and refreshing to see the League trying to stop something so close to reality than a giant alien or robot. 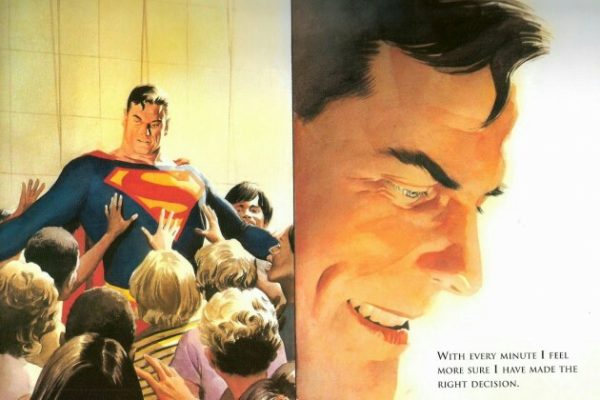 The real selling point of this book, however, is Alex Ross’ excellent artwork. If you haven’t already noticed from the images, his illustrations and colourwork are great, making the heroes look very lifelike. There are several images in the book that are great to look at and Dini’s lack of speech bubbles in the individual stories just helps one to simply take the art in. The Absolute format is also a great chance to examine all the details of Ross’ work and just how much he put in the images, from the detail on the costumes to the people or buildings in the background. Even if you’re not into superheroes, but enjoy art, you should pick this up just for the art alone.

Also collected are a series of brief origins for many of the League’s other members, including some lesser known League members like Plastic Man. There is also a wealth of bonus material with Dini and Ross going over their inspirations for these stories as well as Ross’ process in creating the imagery from sketches to finished images. He goes into detail about how he uses models dressed as the superheroes as a basis for his work, including comparison images between the models striking a pose and that being put to paper. Its fascinating to read and see how his process goes from start to finish. There is also an amazing 8-page foldout of the Justice League to drool over.

Fans of the Justice League, Paul Dini and Alex Ross will certainly enjoy Absolute Justice League: The World’s Greatest Superheroes. Dini and Ross really create something special here by taking an introspective look at the heroes rather than another world-saving adventure from evil-doers. The writing is great, with Dini finding something new in his examinations of the characters while Ross’ artwork is again gorgeous to look at. With the amount of bonus material included, fans will walk away very happy.